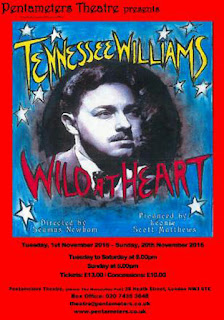 Fresh from its run at Pentameters Theatre in London, did Wild at Heart capture VentSpleen's heart when he watched it recently...

Tennessee Williams, well known by most for A Streetcar Named Desire and Cat On A Hot Tin Roof, is heralded as one of America's foremost playwrights so, for me, an outing of four of his lesser known single act plays was not something that should be missed.

What I absolutely love about Williams is that all of his plays are so rich in complex character driven performance. You could never accuse him of tackling light issues and neither should audiences new to his work expect an easy evening of light entertainment. No, to get the most out of Mr Williams' fabulous work you have to be willing to take a long and unflinching stare at human nature in all of its beautiful intricacy. To experience life is to take every opportunity as it thrusts itself at you, to be willing to leap out of your comfort zone and to enjoy working without a safety net is a prospect that makes many pale even at the thought. Wild At Heart and its Williams quote of "A prayer for the wild at heart living in cages" can be seen as both a statement of intent and a warning for what was is in store.

This evening also marks my first visit to the Pentameters Theatre and I am immediately completely enthralled by the theatre's striking exterior. The theatre, founded in 1968 by Leonie Scott-Matthews, is a complete labour of love and it has aged like a very fine wine. Moving inside the beautiful building and to the auditorium and I felt like one of the children experiencing Narnia for the first time, I was open mouthed and in absolute awe. One step inside and you are transported back in time actually to New Orleans and the time that Williams was writing in. Think Vaudeville and a theatrical warmth that modern venues cannot approach creating in their wildest dreams. Watching a Tennessee Williams play at Pentameters is like experiencing it performed in his own living room. With Leonie Scott-Matthews our wonderful host for the evening I am given the sort of warm welcome that I would expect from a family member. That is, after all, actually what we are, theatre lovers and performers alike, we are here for the same reason and that is an unquenchable thirst for sublime theatre and performance. 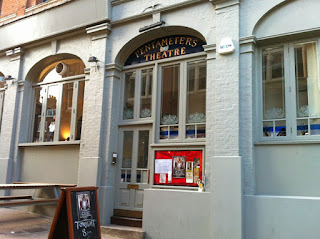 Wild At Heart comprises of four short 15 to 20 minute plays performed back to back with only a short 2 minutes to reset the stage. This is fringe at its very best with the ingenious use of a one room set utilised as the subject matter demands. The mood is further set by a generous and loving compilation of period jazz and I respectfully doff my hat to Frankie Lowe for having exceptionally good taste. As a confirmed Tennessee Williams fanatic, I am particularly excited at the opportunity to experience two of his lost plays being performed. At Liberty and Mr Paradise were only printed in the last decade and, as a result, are yet to enjoy the performance outings that Hello From Bertha and Talk To Me Like The Rain/ Let Me Listen have. As any Williams fan will tell you, it is easy to perform his plays badly and to misread his characters can lead to a performance that lacks the subtle nuance and trait that real human life is blessed with. Director, Seamus Newham, clearly knows his subject matter and it is blindingly obvious that right from the outset this is not going to be a trap he falls into.

At Liberty is heart achingly sad in both its subject matter but in the phenomenal turns by Ava Amande (Gloria La Greene) and Victoria Kempton (Her Mother) Here is an actress who's talent may or may not be in her mind. Opportunity and limelight tragically missed by bad choices and horrible illness yet still unwilling to give up on her dream have never been more poignantly highlighted. Mastering the deep south accent is a trait that is managed right from the outset and, with the performances showcased during At Liberty, Wild At Heart sets its bar at a dazzlingly high level. Ava and Victoria have an onstage chemistry that is as believable as it is impressive. The audience are both laughing at the dark and dry humour as well as sighing with empathetic sympathy as a woman refuses to give into an illness that is robbing her of her very life force.

Mr Paradise is just classic Williams, performed by the amazing Phil Gerrard (Mr Paradise) and Alice Ivor (The Girl) telling a tale of the fleeting nature of fame or recognition. A lost book of poetry on a dusty antique shop floor and a chance meeting between a naive college girl and the author form the synopsis. Life is not always about missing opportunity but it also can twist into a realisation that some people just don't fit the box that society places them in and that is o.k. Mr Paradise is a lost gem that is as much classic Williams as Streetcar and Cat on a hot tin roof are already seen as.

Hello From Bertha, the acknowledged precursor to the aforementioned A Streetcar Named Desire, constitutes an acting masterclass, led by the impossible to upstage Sarah Dorsett (Bertha). Quite how Dorsett manages to have the audience eating from the palm of her hand and from the very beginning of this play is testament both to her acting capability and her understanding and clear passion for Tennessee Williams' work. Bertha is on her death bed and she is not earning her keep anymore. As she contemplates wrong turns and lost love her Pimp (Brad Johnson) and Gloria (Victoria Kempton) are doing their best to consign her to a hospital. Alice Ivor (Lena) and Ava Amande (The Prostitute) are all outstanding and whilst this is very much an ensemble piece it is Dorsett that inspires. To convey such a range of emotion in such a short space of time is truly astounding and I have seen less convincing and effective performances delivered with triple the running time. Half way though the play Dorsett's performance takes a vicious twist into mental illness and yet she still retains complete audience empathy with her characters terrible plight. Dorsett, as the rest of the cast, deserve to be seen and on varied stages up and down the country. Perfection is a word that doesn't seem to do this version of Hello From Bertha justice. It is simply the best adaptation of a play that I am very, very familiar with. Time seems to slow down during the performance and I mean that in a really good way!

Talk To Me Like The Rain and Let Me Listen form the final chapter in the evening's performance and the two hander is a wonderful and welcome change of pace. Alice Ivor (Woman) hits all the right notes with her emotionally resonating performance of a soul who just wants not to be noticed or found by anyone. Her broken relationship with Brad Johnson (Man) feels so broken that it is almost too painful to watch. Both bare their very souls with separate monologues that at the same also feel connected by a shared lost pain. The final scene delivered with such tenderness that the collected audience sighed in spontaneous unison.

I often conclude such a review with an attempt to draw my feelings together. I will do so again, book tickets and go and see this wonderful tribute to the mighty pen of Tennessee Williams. You will find no better guide to assist you in an examination of the human condition than Williams but in refusing to ignores the aspects that society chooses to it can be, in itself, a journey that encompasses the full gamut of human experience.