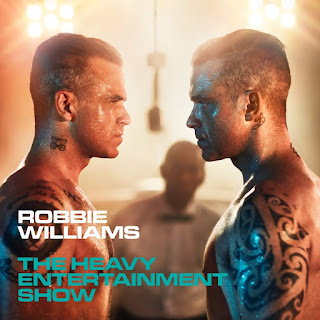 After his listen through Robbie Williams' back catalogue last week, what does Steve Taylor-Bryant make of The Robster's latest album, The Heavy Entertainment Show...

Good evening, children of cultural abandon
You searched for a saviour, well here I am
And all the best ones are dying off so quickly
While I'm still here, enjoy me while you can

A return to form is the wrong description for many of us that don't mind Robbie's last few albums, but Heavy Entertainment Show has a classic Robbie Williams sound not really heard since Escapology. The album is full of big, anthemic choruses, wonderful poppy licks and rhythm and has a singer/songwriter that honestly sounds like he's having fun. From the ego filled title track at the start of the album you are under no illusions that the cheeky chappy persona is going to hold you in the palm of his hand for an hour and a bit so let's have a quick ramble through each track shall we?

Heavy Entertainment Show - this is the 'Let Me Entertain You' Robbie all older but still not grown up. It's funny, it's a laugh, it's big in its production and full of timpani and brass that just lends itself to the stadiums he's soon going to be touring. It's the most Guy Chambers sounding tune I've heard since I've Been Expecting You was released nearly two decades ago and is most definitely 'where Eminem meets Barry Manilow'.

Party Like a Russian - really didn't like this song when it was first released but on multiple listens to the album I now appreciate more than I thought I would. It's quite clever lyrically to talk about hedonism and partying whilst giving a social commentary on how you think an entire nation acts, did I say clever? I meant bigheaded. Musically very interesting though with its modern pop feel mixed with classical Russian strings and choruses. Still not my favourite track by a long way but much better than it was on first listen.

Mixed Signals - the first song on the album that has a generic pop song feel to it, like it's written purposely to be a single. That's not necessarily a bad thing, and Robbie's voice suits it well, but it's nothing more than a top 10 filler track.

Love My Life - there is a beauty to this song I can't quite put my finger on. It may be the elegance of the piano mixed with a dancier rhythm, or it may be that listening to Robbie sing the lyrics I find I genuinely believe him. Certainly a great track but honestly don't know why and I like not knowing.

Motherfucker - by a million miles my favourite song on the album. It musically sounds like a classic Williams/Chambers tune that would fit any of the classic albums. It's also Robbie's unconventional guide to parenting his own children by admitting his old addiction faults and letting the kids know exactly what mix of DNA they have. "Your Uncle sells drugs," a line about their grandma being a fluffer and many uses of the titles name might lead you to think it's Robbie trying to be edgy in his middle age, and you may be right, but I took something genuine from it. I saw bare open honesty and, to be fair, any child with Google will know what he's like any way, but he wants them to better than him. One line in particular proves this, to me at least and I shall leave you with it for this track.

Bruce Lee - brilliant! Not sure it was intentional or not but this is a tribute to everything good musically that came out of the 1970's. This is Let's Stick Together or something by Marc Bolan.

Sensitive - very dance with a mixture of elements from electronic music. A friend of mine who likes this kind of music says it's great. Take his word for it because it doesn't work for me at all.

David's Song - this isn't quite Angels but you know those sing-along ballads Robbie does better than most? It's another one of those. I don't even know the words that well yet but can't help but hum it at work. It's a real ear worm.

Hotel Crazy - a duet with Rufus Wainwright that is exceptionally pleasing. Some really dirty brass and sax sounds underneath some calmly, almost spoken lyrics that really just carry you. I would imagine that if you were stoned this time might come alive even more.

Sensational - here we go! This is Escapology worthy. This is really stadium worthy and again has some classic Williams/Chambers licks and feels alongside again some brilliant brass. This is "encore at a show" stuff and a fantastic closing track for the standard album.

Now we come to the Bonus tracks on the "Deluxe Edition" I got my hands on.

When You Know - another autobiographical Robbie song about his past life and the changes he's gone through since he "calmed down" and got married. It's okay, not earth shattering but very listenable.

Time on Earth - this song isn't my usual cup of tea musically, bit too dance/80's synth pop but I really enjoyed it. Lyrically very Robbie...

"I'm gonna walk onto that stage like it's my destiny
Stand and tell the truth, make no apologies
If tomorrow I should die, these are my memories
I'm gonna take this simple life and make history"

I Don't Want to Hurt You - musically changing tempo and a heart felt Robbie. It's one of those songs you need to be in a certain mood for, when the mood strikes it really works, when it doesn't strike you wonder what they were trying to achieve with it.

Best Intentions - when you give up certain crutches that you've used to get through life you often feel a lack of self worth and a deep depression can set in. Best Intentions covers this really well, and also contains some great harmonica. It covers the way those of us that battle inner demons on a daily basis can sometimes struggle with the normality of sobriety. Excellent song that really speaks to me but may not work for you all.

Marry Me - about his wife? Maybe a love letter to the fans? Who knows? Who cares? It's another Robbie ballad that really pleases and I will guarantee you it ends up as a wedding song to rival Angels. Brilliant end to a really good release.

This is older Robbie writing and singing and yet still trying to be twenty something Robbie and then gift wrapping the album for you with a message 'I can't believe this schtick still works". Well, yes, Robbie it does and thank you.

Listen to the album sampler below for clips from all the tracks.