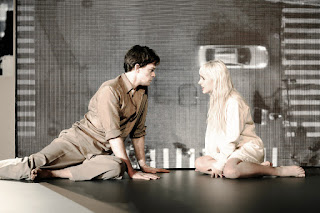 This is Not America, as Ren Zelen watched the musical Lazarus, on stage in London's King's Cross Theatre (slight spoilers)...

Lazarus, a musical co-written with acclaimed Irish playwright Enda Walsh, emerged suddenly in late 2015, as part of the burst of creativity that also included Bowie’s album Blackstar. Songs from that album appear alongside others throughout Bowie’s career, punctuating Lazarus’s murky storyline like musical fireworks (appropriately enough, as this was November 5th).

Characteristic of Bowie himself, Lazarus is by turns, thrilling, disturbing, enigmatic, perverse - an irresistibly arresting piece of art.

Appropriately titled, and self-consciously so, one imagines, as it knowingly expostulates on a certain kind of life and a certain kind of death. In this case the life of an alien, his retreat from society and then his struggle to decide whether to re-join the world. Ironically, just when he begins to feel that it may be time to do so, his struggle changes to the need to come to terms with leaving it instead.

The alien in question is Thomas Jerome Newton, the character Bowie played in The Man Who Fell to Earth, but an audience familiar with Bowie’s life and work would not find it difficult to see the analogy.

Newton, now played by Michael C Hall, languishes in his penthouse apartment on Second Avenue, wearing beige pyjamas, pining for Mary-Lou, the blue-haired woman who introduced him to gin and television, and enduring his pain with mordant humour and Twinkies. Thomas Jerome Newton has faded from public consciousness, but he has never aged.

The first few scenes occur in observable reality on a blank stage (designed by Director Ivo van Hove’s collaborator Jan Versweyveld, with the band sequestered behind plexiglass). Newton’s personal assistant Elly (Amy Lennox) describes him to her husband as “sort of sad – sort of unknowable in the way that you imagine reclusive, rich, eccentric men to be”. Newton portrays himself more tellingly, “I’m a dying man who can’t die.”

However, we are also made party to Newton’s own tortured psyche, and soon an angelic girl (Sophia Anne Caruso) with a suitably angelic voice, appears. She is part guardian angel, part a fragmented memory of Newton’s own daughter. Reality and hallucination blur as Newton begins to converse with characters that are real and others that are apparitions from his own mind - sometimes both at the same time.

The girl says that she is here to help him obtain his dearest wish - to go back home to the stars. She tapes the outline of a rocketship on the floor of his apartment with masking tape. In just one of many brilliant uses of cameras and projection by video designer Tal Yarden, the screen shows Hall lying the floor, on top of the rocketship, which begins to resemble a coffin. He doesn’t want to die because he doesn’t know what might follow, but his frustration with immortality forces him to find hope and encouragement from his hallucinatory muse.

Meanwhile, a sinister figure in a black suit ironically named Valentine (Michael Esper) cuts down those he perceives to be in the midst of love or happiness, and stalks Newton, weaselling his way closer and closer to his penthouse, armed with guile, envy, insidious intent and a flashing switch-blade.

Characters are randomly dispatched (no need to indicate what Valentine may be a metaphor for), descend into despair or delusion, or say goodbye - departure and death loom heavily in the air. 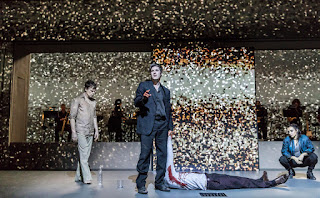 Not surprisingly, having been created by Bowie, the visual, metaphorical and surreal are emphasised over the explicit. Various artistic media are employed - props, screen projections, liquid is put to various uses, black balloons are popped with knives, female characters try to metamorphosise into other female characters, kabuki actors invade the stage, etc.

There are scenes where songs only tangentially fit into the vague storyline, but interestingly, some of the classics are rearranged and reframed in a completely different context — Elly sings ‘Changes’ to her husband while dreaming of a different life, then she sings a duet version of ‘Absolute Beginners’ while trying to seduce Newton.

Other numbers seem out of context regarding the story, such as when Newton dances with a geisha during ‘It’s No Game (Part 1)’ from Scary Monsters, and sings on an empty stage projected with Berlin landmarks during ‘Where Are We Now’ from 2013’s The Next Day. These seem more like a man pensively musing on the state of the world (at least the world as it was at the beginning of 2016, when Bowie left it – ‘This is not America’ has latterly become even more chillingly pertinent).

Throughout it all, Newton remains alienated (in the truest sense of the word) lonely and yearning. Michael C. Hall somehow channels Bowie's distinctive, cutting vocal tones, making it even more impossible to detach the creation from its creator.

Like Bowie himself, Lazarus is strange, funny and heart-breaking in alternating measure. Ultimately, it is a two-hour meditation on loss, violence, grief and hope (with no interval) but the music is so unexpectedly integrated and the visuals take so many fantastical, arresting turns, that it never drags. Lazarus isn’t a repackaging of greatest-hits, but more a poignant and sombre retrospective.

If one considers Lazarus along with Blackstar, his final album released two days before his passing, both give us some insight into Bowie’s last few months on Earth, and may perhaps be seen as companion pieces.

Although the play may be partly named for Emma Lazarus (the poet whose poem is engraved on the base of the Statue of Liberty) it is impossible not to feel the play is appropriately titled for other reasons – Bowie’s presence towers over the whole venture. He’s gone, but he lives on – as, it appears, he knew he would.

In the words of co-writer Enda Walsh, Lazarus is the “trajectory of a man wanting to leave Earth, and being helped by some and stopped by others…. It’s a strange, difficult and sometimes sad dream that Newton must live through, but in its conclusion – he wins his peace”.