Opinion - How Strange the Change 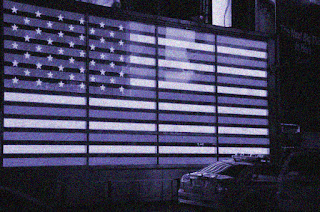 A striking new treatment of America's National Anthem by renowned composer Thomas Hewitt Jones gets VentSpleen musing over the power of music....

Music is a neutral force which can be used for good or ill. It can evoke such strong emotion and has the influence, when focused effectively, to topple governments and overthrow regimes but equally it can be used as a love song for someone we hold dear. Ask yourself why all political campaigns have a soundtrack or at the very least a song which is used in repetition. No one is saying that Tony Blair won the General Election because of his use of the D:Ream song "Things Can Only Get Better" but it brilliantly captured the mood of a nation. Music has always pushed boundaries and crashed through excepted convention, Mozart did it, so did The Sex Pistols and look at Rock and Roll as an entire genre! Hugely controversial and at the time was seen as ushering in a whole generation worth of debauchery and free living.

As a musician I have always been fascinated by what happens when you change keys (Major to Minor being the focus of my attention here.) Typically, songs written in a major key are happier in their sound and are more triumphal in their tone. Major keyed songs or music are used to convey hope and have been used effectively to rouse stadium sized audiences into whatever extreme feeling is required. Conversely, music written in a minor key will induce sadness and is used to evoke emotions of a more negative tone. Take Les Miserables where the central pieces of music are used as anthemic calls to arms for the students wishing to incite bloody revolution and unseat a corrupt political establishment. Therefore the songs "Red and Black", "Do You Hear The People Sing" and "One More Day" stirs the soul to an shared cry. Music is a neutral force but fill it with empathetic feeling and phrasing and it sits on the fence no longer. Music in the hands of a talented and visionary composer changes people and, more importantly, it asks questions of those who listen to it. That is its reason for existing and this cannot and should not be silenced or censored, ever.

Two years ago I stumbled across an amazing singer called Chase Holfelder and his amazing version of the Star Spangled Banner. He too was experimenting with minor and major and his version of the American National Anthem was recorded in a minor key. The transformation was dramatic and striking as the powerful and proud words were changed into something very different. The well known words sounds more plaintive and desperate. There was no public outcry at Chase's release and one would argue,with the singing of the words, could have courted criticism from the more conservative of patriotic Americans. As far as I can tell no negative comments were forthcoming and the song has now been included as a track on Chase's excellent album, Major To Minor. Music has power then but the beauty in discovering composers who are willing to 'riff on a theme' has always impressed me.

Thomas Hewitt Jones is an award winning composer whose work you have probably heard on television and film. Most recently Hewitt Jones hit the headline with his spontaneous and inspired reworking of David Cameron's jaunty little exit hum on announcing his resignation as Prime Minister. I loved Cameron's Lament as Hewitt Jones cleverly interweaves the brief Cameron 'hum' into a wonderful piece of music. The haunting strings shares musical space with piano refrain and it was just sublime. For me, this was more than just music as once again a composition seems to encapsulate the mood of the nation. To put it another way, Hewitt Jones sound tracked a moment that the nation will never forget and I have been a fan ever since.

Classic FM are clearly fans as well because this week they ran an article about another Hewitt Jones composition. The Hate Strangled Banner was composed in the wake of Donald Trump's Presidential victory and again, capturing a snapshot of the feeling at the time. This time though, the mood wasn't of one nation but of the entire global community. Hewitt Jones has set the tone of this piece as "slow, disillusioned and depressed" it was not labelled as "vitriolic, angry and resentful" The piece of music is in minor and is solemn and questioning in tone and performance. It asks questions, it demands answers but more importantly it hints at the need for reasoned discussion. In the wake of a day which has brought about ebullience and celebration for President Elect Trump and his supporters but also horror, fear and anger from others, this is an election which has already courted controversy. Hewitt Jones does not take sides with his music but by title and by minor keyed tone he alludes to feelings that are prevalent in all nations. The opening bars are led by sparse and retrained piano and the feel is one of funereal loss which is a feeling that deepens when the strings take up the familiar tune. Asking questions as music often does, why so sad? is this the loss of all America has fought for?

The track is a short 3 minutes in length but it is met by silence at the end, it took my breath away and it affected me to my very soul. I shared the link on Twitter as a beautiful and evocative piece of music and I was met with an almost immediate and aggressively angry response. I am fairly sure that the person concerned could not have had time to read the article much less listen to the track. Yet my post was met with a tweet labelling it "deplorable" and this I have an issue with. It may have been a reaction to the title and that I can understand, but are we really living in an age when deeper investigation is disregarded in favour of knee jerk reaction? I will not share my own political views in this article because the focus should be on the brilliance of Hewitt Jones' composition. What followed was an uncomfortable conversation in which I felt the need to defend a piece of music that had moved me. I have watched dumb struck throughout this political campaign as hate filled rhetoric is thrown from both sides and by both supporters and candidates alike. The media doing its best to act impartially but seeming as if it revels in every verbal punch and ferocious degrading put down. Is this what we have become? The very nation which so proudly stood as the land of the free is now reduced to a battle ground for ideologies and the carnage that is already being wrought fills me with despair.

Where is the proud nation that welcomed people of all races, colours and creeds? Where is the society that cared and the people that thought more of giving a hand up to others? I don't see it in Britain and neither is it America anymore. Hewitt Jones has captured the mood of a nation today and I have witnessed first hand the reaction from a people that no longer values free speech or alternative opinion. In the next coming days and years I hope that we can hear the familiar phrases of The Star Spangled Banner but once more performed in a major key. Tonight though I have tears in my eyes and I don't know what I am crying for anymore.

Find out more about Thomas Hewitt Jones, his music and his next performance dates here