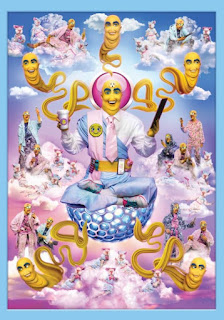 Wot u :-) about? is a new free exhibition opening today at Tate Britain bringing together new works by the contemporary artist Rachel Maclean, who will represent Scotland at the 2017 Venice Biennale....

The exhibition, which coincides with a current major new solo show at Plus Tate partner, HOME, Manchester, will comprise of a new film and a series of related prints. Wot u :-) about? is focused on the commercialisation of data management, beauty and well-being and presents a dark reality in the colourful aesthetic of children’s television.

Maclean’s distinctive visual output combines multiple genres such as the fairy-tale, horror films and advertising to critique consumption in all its forms, and modern society’s dependence on technology. In her work over the last 5 years, Maclean has directed a series of short films in which she is the only actor, miming to recorded audio and using heavy make-up and elaborate costumes.

In the film, It’s What’s Inside That Counts (2016), Maclean acts as numerous grotesque characters, and uses computer technology to generate fantasy locations. Six brightly-coloured new prints will also accompany the film, displaying its otherworldly characters and backdrops, focusing viewers on the specific props and environments and encouraging them to think about the individual self within cultures of the Internet.

Rachel Maclean lives and works in Glasgow. She studied at the Edinburgh School of Art and The School of the Museum of Fine Arts Boston, USA. She will represent Scotland at the 2017 Venice Biennale, with solo exhibitions in Scotland and Venice. This year she took part in a residency at Artpace, San Antonio, Texas, was nominated for the Film London Jarman Award and exhibited as part of Frieze Film. Recent exhibitions include: British Art Show 8, Leeds (2015), Ok, You’ve Had Your Fun, Casino Luxembourg (2015). Recent film festivals and screenings include: Moving Pictures, Touring programme curated by British Council and Film London, Lolcats, Impakt Festival, Utrecht, The Netherlands, (2014); A Whole NewWorld, Berwick Film Festival, Berwick upon Tweed, England. Maclean was nominated for the Film London Jarman Award in 2016 and 2013 and won Glasgow Film Festivals Margaret Tait Award in 2013.

Art Now is an ongoing series of free exhibitions at Tate Britain focusing on new and recent work by emerging artists. Since the early 1990s, Art Now has recognised talent at its outset and provided a launching platform for artists who have gone on to become established figures in the international art scene. The series has recently included Art Now: Sophie Michael Trip (The Light Fantastic) and the group exhibitions Vanilla and Concrete and The Weight of Data.