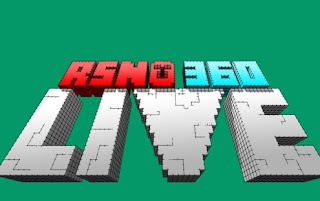 Five sold-out performances of RSNO 360 Live, which runs from tomorrow,  Tuesday 22 November to Thursday 24 November, feature popular classical works alongside two new commissions from Scottish-based composers, a free interactive app for digital devices and one of the world’s most successful video games ever, Minecraft, being played live on a cinema screen.

The new concerts will feature two commissioned works, Oliver Searle’s Sauchiehall, written to celebrate the Orchestra’s 125th anniversary and its move from Glasgow’s West End to the City Centre, a journey that can be made directly along one of the city’s main thoroughfares, Sauchiehall Street.

In addition to Oliver Searle’s Sauchiehall, Glasgow-based composer Jay Capperauld’s new work Terrarium has been written with a set introduction and coda but with five interchangeable central sections which can be performed in any order, to be determined by the audience at each concert. Terrarium will be performed while the audience explore five distinct worlds on the big screen, through the medium of Minecraft.

The new app, developed by the RSNO Learning and Engagement team and supported by Creative Scotland’s Innovation Fund, which will be utilised as a supplementary training aid, is available on a variety of formats. Taking the poster of the orchestra with its separately-highlighted sections many school music departments displayed on their walls as inspiration, the app, RSNO 360, presents the opportunity to view and listen to the RSNO from any chosen section in the Orchestra. Oliver Searle’s specially-commissioned work Sauchiehall was recorded for RSNO 360 using binaural microphones which mimic human hearing and the resulting recording provides an audio-3D experience when listened through headphones. RSNO 360 will be available on general release from the Apple App Store from Tuesday 22 November.

RSNO Associate Leader and Learning and Engagement Artistic Director William Chandler, who will be presenting the programmes, said: “We have purposefully designed a concert platform to appeal to what young people love most, technology. By incorporating the most successful video game ever into our presentation we will introduce a new generation to the ultimate live music experience and plant the seeds of a lifelong relationship with the dynamic and colourful world of the symphony orchestra. Never before have we provided this level of interactivity, both in the pre-concert workshops and the performances themselves.”

RSNO 360 Live is generously and vitally supported by Foyle Foundation, The Hugh Fraser Foundation, The McGlashan Charitable Trust, Glasgow City Ward Areas and George and Mary Firth Bequest. RSNO 360 Livestarts on Tuesday 22 November and runs until Thursday 24 November at the New Auditorium at the Glasgow Royal Concert Hall. These performances are all sold out. Further schools performances by the RSNO will be announced in due course. For more information visit www.rsno.org.uk.