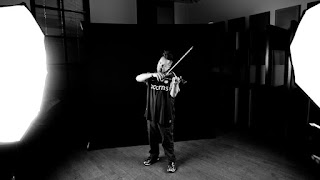 The legendary musician will play a groundbreaking show combining greatest hits and new works, accompanied by a host of incredibly special guests, at Britain’s most iconic music venue on Tuesday 14 March. His special, one-off performance will be one of the highpoints of Love Classical, a major 12-day festival comprising 21 events across seven spaces.

Other stand-out events include a performance by the London Contemporary Orchestra in the venue’s underground Loading Bay, filmmaker Christopher Nupen introducing a specially-curated selection of his unforgettable classical documentaries – including a screening of his 1969 film, The Trout – and a new exploration of Indian classical music.

Nigel Kennedy and Friends: Gala Celebration, goes on sale at 9am today and will see him playing a varied repertoire ranging from Bach to Hendrix, world music to jazz.

Lucy Noble, Director of Events at the Royal Albert Hall, said, “This festival is a unique event celebrating the best of classical music, from acclaimed, arena-filling performers to the rare, weird and wonderful, taking in concerts for kids, free exhibitions and even yoga accompanied by a harpist! For 145 years, we’ve been the home of classical music in Britain, and our two-week celebration of this incredible, life-changing artform has something for everyone. We are incredibly proud to announce Nigel Kennedy as the final headliner for the festival. His unique talent, virtuosic artistry and extraordinary ability to communicate with audiences have made him one of the world’s most popular and well-respected performers, and this show will be like nothing you’ve ever seen before. So whether you’re new to this music or a long-time fan, we’re confident that by the end of the festival, you’ll Love Classical.”

Nigel Kennedy told Radio 2 recently, “I love the Royal Albert Hall. It’s like a gladiatorial arena: you’re on your own, facing all those people, and it’s just an amazing communication. If you’ve had great artists walking on that stage before you, then you’ve got this kind of osmosis of their vibe, there’s some real history and real life to that place because of who’s been in there.”

Love Classical kicks off on Saturday 4th March with the London Contemporary Orchestra gig, and finishes with Lang Lang’s second headline show on Wednesday 15th March. Innovations at the festival include the chance to compose a piece for one-handed pianist Nicholas McCarthy to perform at his Elgar Room show and the opportunity to pit your wits against fellow fans at the Classical Quiz on Sunday 12th March.

Find out more about Love Classical and book tickets on the Royal Albert Hall Website.