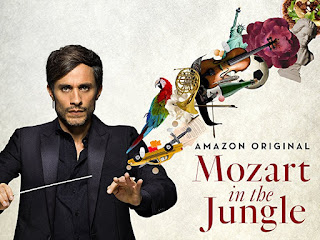 Maestro Rodrigo returns when Mozart in the Jungle season 3 streams on Amazon Prime next month. It's safe to say Susan Omand is a little excited about this...

What? You've not watched the first two seasons yet? Get with the programme people! Mozart in the Jungle is just the best (IMHO) half hour series to come out of Amazon Prime in the past two years. It follows the fictional fortunes of a young oboist, Hailey (Lola Kirke,) and the New York Symphony Orchestra under their "prodigy" conductor and all round creative genius Rodrigo de Souza (the wonderful Gael Garcia Bernal) who was brought in to shake things up when the "old guard" Maestro Thomas (the equally wonderful Malcolm McDowell) is forced to step down although he isn't going quietly. Add in a set of strong supporting characters, including a drug dealing percussionist, an industry savvy cellist, a journalistic blogger and glorious Gloria, the "business head" of the Symphony, who has to deal with the fund-raising much to everyone's annoyance, and you have the makings of a very strong ensemble comedy.

And that's before you add in the music, which is utterly sublime. Several times in the previous two series I have been brought almost to tears by the beauty of the music and the way it is fitted around each episode. For example, when, in season 1, they rehearse the 1812 Overture in a fenced off lot because Rodrigo wants them to reconnect with their audience or, in the final episode of Season 2, they get locked out of Symphony Hall due to a dispute with the board and end up playing Ravel in Washington Square Park. There have also been so many famous classical cameos too (not counting the composers that are the chatty figments of Rodrigo's mind) with appearances by performers such as Lang Lang, Joshua Bell, Anton Coppola and even the Dude himself, conductor Gustavo Dudamel, on whom the character of Rodrigo is loosely based.

So anyway, season 3 drops on December 9th on Amazon Prime and, yesterday, they released the trailer. Watch it below then go and binge-watch the first two seasons to get caught up.