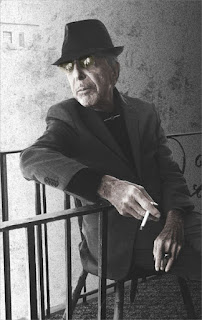 It has been announced that Leonard Cohen has passed away at the age of 82...

Here's how it was announced on the official Facebook page.

Starting out as a poet and novelist in the 1950's in his birthplace of Montreal in Canada before moving to Greece, Leonard Cohen has always had words in his heart and a way of capturing a range of feelings with a single phrase, winning several poetry awards. But it was once he had moved to the US and his distinctive dark voice appeared on the music scene in the late 1960's with songs such as Bird on the Wire, Story of Isaac and You Know Who I Am that he started to get noticed by the general public and he successfully toured abroad in 1970, coming over to the Isle of Wight Festival.

From then his work grew, with songs featuring in films and being covered by others, bringing his words to a new generation over the next 30 years as his words were heard in soundtracks as diverse as Pump Up the Volume and Natural Born Killers until, in 1994, he dropped out of sight and sound for 5 years, seeking solace at a Buddhist retreat. However he found no peace there and returned to his love of writing and performing, building a new following, mostly through niche jazz recordings, that was added to in no uncertain terms when his song Hallelujah, first recorded in 1984, got a resurgence in popularity.

New recordings and world tours filled the 2000's and he was working solidly and consistently right to the last, with his final album, You Want it Darker, only coming out on 21st October this year.

As a man who could reach into your very soul and put your hurting into powerful words, a man whose dark voice comforted in the even darker nights, he will be missed.

You want it darker? Well, it's dark now.