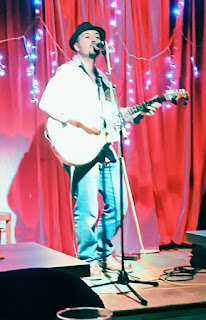 Today is a good day to get up to (good)speed with a certain Plymouth-based singer-songwriter, acoustic guitar wrangler & stage stormer as Gozer Goodspeed gets set to take over the radio airwaves again tonight...


We have been following the rising star of Devon singer songwriter Gozer Goodspeed for a few months now but, if you haven't (why not?) you can read Steve Taylor-Bryant's review of The Rattlebone Colour EP here and catch up with their very entertaining interview here.

Fresh from achieving international airplay, courtesy of the highly acclaimed Artie Martello's "Mostly Folk" podcast from upstate New York, Gozer Goodspeed is tonight going to be back on the very show that played his track, Rattlebone Colour, to a round-table panel for discussion a few months back, as he takes part in BBC Introducing on Radio Devon. Only this time Mr G is going to be on the other side of the round-table [Do round tables have sides? - Ed] as he will be a panellist discussing other people's music as well as talking about his own music and other upcoming ventures.

Talking of which, rumour has it that after Gozer Goodspeed's first gig, the venue-holder gifted him a hat in lieu of payment. The gigging has continued and, although the payment has apparently changed, the hat hasn't so, if you are in or around the Devon area and want to catch his music (and hat) live, Mr Goodspeed has a couple of local gigs lined up, the first on November 30th at the Plymouth Blues Bar and Grill and at the Timepiece Nightclub in Exeter on 3rd December. Find out more about both on his Facebook page.

Catch BBC Introducing either live on Radio Devon tonight between 8 and 10pm or on streaming/ catchup online here.