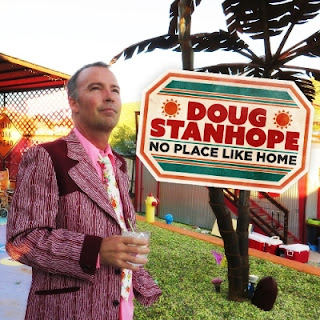 We love stand up comedy here at AlbieMedia and rejoiced at the news that Comedy Dynamics will release Doug Stanhope's No Place Like Home on November 18th on CD and Digital download...

Taped where Stanhope calls home in Bisbee, Arizona at the Bisbee Royale, Doug covers a range of topics from mental illness and ISIS to Americans' standards of poverty. No Place Like Home was directed and executive produced by Brian Hennigan, executive produced by Christi Dembrowski, Johnny Depp, and Sam Sarkar of Infinitum Nihil and Brian Volk-Weiss, president and founder of Comedy Dynamics. Originally debuting on Seeso on September 15th, 2016, the audio from the special will be available on CD as well as on iTunes, Google Play, Spotify and all other streaming sites on November 18th, 2016.

"We're thrilled to be working with a comedian of Doug's caliber. No Place Like Home is an album comedy lovers everywhere will enjoy for generations," said Brian Volk-Weiss, President and Founder of Comedy Dynamics.

No Place Like Home is Stanhope's fourteenth comedy special since he began his career in stand-up over 25 years ago. Over the course of his career, Doug has performed in the Just For Laughs Festival in Montreal, the U.S. Comedy Arts Festival in Aspen, and was named one of the Top Ten Comics to Watch by Variety and the Hollywood Reporter. He has also made numerous television appearances, including a memorable performance on an episode of his friend Louis C.K.'s series Louie. Doug's growing fan base has helped him sell out theatres across the world. Called "the most important stand up working today" by Ricky Gervais and "one of the most bracing live acts on the stand-up circuit" by The Denver Post, Stanhope's confrontational and vulgar style of comedy has led to him being compared to legends like Richard Pryor, Sam Kinison and Bill Hicks.