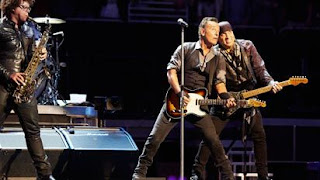 “The first time I played for an audience I was about 6 or 7 and I went in to the garden and some of the neighbourhood kids were there, so I strapped on my guitar and strummed it and tried to sing a few Elvis songs. I just made a horrible noise. I had no ability to play at all. But I did enjoy bangin' the hell out of it. And that's when I smelled blood for the first time!"

Channel 4 has been granted exclusive access to Bruce Springsteen for a documentary revealing the man behind the music. With home video from his youth, and footage from his early years performing solo in Greenwich Village, this documentary gives a unique insight into the man as well as the musician.

Having sold 160 million albums around the world, Bruce Springsteen is now a best-selling author following the release of his autobiography, Born To Run, which debuted at the top spot in many countries.

The new feature-length documentary is being produced by Lonesome Pine Productions in collaboration with Thom Zimny (Bruce’s long term videographer), and will be directed by Nigel Cole (Calendar Girls, Made in Dagenham).

In intimate conversation Bruce will explore the seminal moments that fuelled his relentless drive to become a musician and which have provided the influence for some of the most critically acclaimed and loved songs of the last 50 years. He will also talk about his first foray into prose writing with his autobiography, ‘Born to Run’; a book which has been critically acclaimed around the world.

The revealing film will give audiences a unique insight into the life of one of the most admired and respected musicians in the world. Bruce will explore and explain his greatest influences, detailing the people and places that have inspired him and what motivates him to continue to tour and write.

The programme has been commissioned by Jonny Rothery, Commissioning Editor, Formats & Music at Channel 4 and will air later this year.