News - Bowie on the Beeb in January 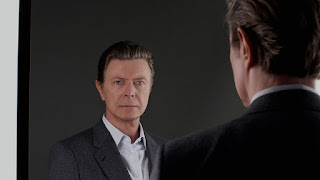 One year on, a short season of TV and radio programmes on David Bowie is coming in January, including a new landmark documentary, David Bowie: The Last Five Years...

David Bowie: The Last Five Years will focus on the three major projects of Bowie's last five years - the best-selling albums, The Next Day and Blackstar, alongside the musical Lazarus which, following rave reviews and a sold out run off Broadway, has recently arrived in London. With unprecedented access to Bowie’s closest friends and collaborators this will be an unforgettable tribute to one of the greatest musical icons of modern times. And it will also be an opportunity to experience some of Bowie’s iconic songs from his incredible back catalogue which will illustrate the continuity of his later work with the rest of his career.

Produced and directed by Francis Whately, this new film will be a follow-up to his acclaimed David Bowie: Five Years which was broadcast on BBC Two in 2013. As with the first film, this new piece will feature a wealth of rare and unseen archive footage and early audio interviews which have never been released before. This includes the original vocal which Bowie recorded for Lazarus, his last release before his death, which has never been heard before.

Francis Whately said “I always hoped that I would make another film about Bowie as we were only able to scratch the surface in the first film, but I just didn’t expect it to be this soon. However, looking at Bowie’s extraordinary creativity during the last five years of his life has allowed me to re-examine his life’s work and move beyond the simplistic view that his career was simply predicated on change - Bowie the chameleon… ‘ch ch ch changes’ etc. Instead, I would like to show how the changes were often superficial, but the core themes in his work were entirely consistent – Alienation, Mortality and Fame.”

Adam Barker, Channel Executive for BBC Two and BBC Four, added “BBC Two is thrilled to have commissioned this unique documentary chronicling the most recent achievements of one of the most significant figures in the history of music.”

The original band members of The Next Day album will be reunited alongside Bowie's long-time producer Tony Visconti to recreate the production process for key tracks on the album. There will be interviews with the video directors and the stars of Bowie's last videos, including the Stars (Are Out Tonight), exploring how the album consolidates Bowie's back catalogue with thematic and musical references to his past, whilst at the same time being a triumphant return to form after a ten year hiatus.

For the album, Blackstar, the film visits the famous 55 bar in New York where Bowie first encountered the jazz quartet who would become the musicians for this, one of his most innovative and original albums. Whately explores how the record was to become Bowie's stunning epitaph. And the film features exclusive access to the writer, director and cast of Lazarus and will tell the story of the project from its inception through to the opening night, showing Bowie’s unwavering commitment to the project right up to the very end of his life.

Lazarus illustrates the connections between the play and David's own career and explores the extent to which it is possible to draw a comparison between the main character, Thomas Jerome Newton, first introduced in the Man Who Fell to Earth film, and Bowie himself. The play includes a reworking of some of Bowie’s greatest hits including Heroes, Life on Mars and Changes. Whately is given access to film the rehearsals in London plus a complete performance.

Additionally, BBC Four will broadcast Bowie at the BBC, a compilation of rarely seen archive exploring Bowie’s incredible career as captured by the BBC from his very first appearance in 1964 to through to his death in 2016.

BBC Radio 2 will broadcast a documentary, Life On Mars, presented by Martin Kemp examining the legacy of the song which is widely regarded as Bowie’s masterpiece, featuring unreleased music archive. BBC Radio 6 Music will be asking listeners to vote for their favourite Bowie album and holding a Listening Party for the No 1 choice, and Marc Riley will present a show in tribute to the singer. The programmes will air in January 2017, marking what would have been David Bowie’s 70th birthday and one year on from the legendary musician’s death.

Bowie at the BBC on BBC Four is a compilation of clips from the BBC archive giving an overview of Bowie’s extraordinary career from 1964 to 2016. It will feature legendary and rarely seen performances, interviews and insights into his many personas. From a 17-year-old David Jones interviewed by Cliff Michelmore in 1964, onto 1973 when as David Bowie he gave his seminal Top of the Pop’s performance of Starman, and to 2000 when he performed at Glastonbury.

The programme includes other classic Top of the Pops and The Old Grey Whistle Test performances of Bowie singing Queen Bitch, Oh you Pretty Things and The Jean Genie, and looks at Bowie the actor with interviews about his roles in The Elephant Man, Merry Christmas Mr Lawrence and Absolute Beginners. Bowie at the BBC will give an insight into the one of the most significant performers of the 70s and beyond with interviews and performances showing just how innovative, funny, surprising and influential Bowie and his many personae were to generations.

For BBC Radio 2, in Life On Mars (Monday 9 January, 10pm), Martin Kemp explores this 1971 song of Bowie’s which is widely regarded as his masterpiece. With access to exclusive unreleased music archive, the documentary examines how Life On Mars came into being and the significance of the lyrics. Kemp explores whether it could be seen as the musician’s legacy song – the one for which he will be most remembered. The programme will feature never before broadcast archive recordings, Bowie’s original piano and voice demo and further archive, and hears from those who worked closely with Bowie to create this memorable recording. These include original producer Ken Scott, former EMI A&R Tris Penna, Rick Wakeman, Mick Rock (who shot the video), and archive interviews with Bowie. Produced by Sue Clark Productions.

Martin Kemp said “In celebration of the genius that is David Bowie, I'm excited and honoured to present this programme Life on Mars? in January for Radio 2 to mark what would have been his 70th birthday. For me Bowie was a great inspiration and influence on my own music career.”

On BBC Radio 6 Music, on what would have been his 70th birthday Sunday 8 January, there will be a Now Playing special with presenter Tom Robinson. 6 Music will also be asking listeners to vote for their favourite ever Bowie album, from a Top 10 shortlist compiled by the station’s presenters. On Monday 9 January, the number one album will be played in full at 10pm in a 6 Music Listening Party presented by Gideon Coe. On Tuesday 10 January (the first anniversary of Bowie’s death) Marc Riley will present a tribute show to him. 6 Music will also broadcast again Iggy Pop’s Bowie special in which Iggy devoted a whole show to his friend and collaborator, playing his favourite Bowie tracks and chatting about the times their paths crossed over the years.

Paul Rodgers, Head of Programmes for BBC Radio 6 Music, said “I remember the sadness people felt in January 2016 when we learned of David Bowie’s death. It feels appropriate that the 6 Music community should commemorate and celebrate his life and legacy one year on.”