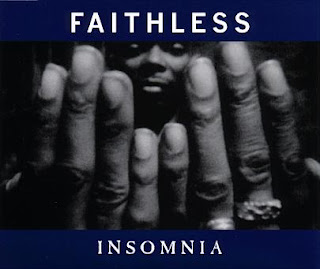 
Monday was World Mental Health Day, which aims to educate people on Mental Health issues and dispel some of the surrounding stigmas by getting people talking about the topic. This week, SoTD will be all about songs on that theme, that hopefully illustrate how music can be both affected by, and affect, illnesses of the mind.

‘Tiredness kills’ said a once-famous ad, and this song is all about the extreme manifestation of that, Insomnia. A far more common occurrence amongst people than often believed, insomnia has multiple causes. From stress, a chemical imbalance, poor sleep routines or even something as simple as a highly emotional event, insomnia seems to have existed as far back as there was a way of recording its existence. It strikes people of all ages and backgrounds.

Faithless' song, like many of the songs on the list this week, is semi autobiographical. Written by vocalist Maxi Jazz, it tells of a time in his life when the same symptoms that induced paranoid thoughts also left him unable to sleep for days on end.

Oddly enough, he found a cure in smoking cannabis, though he later found a more permanent solution by joining Faithless and finding an outlet for his nervous energies.


If you want to learn more about mental health issues, or feel that you may be suffering from them or a related illnesses, the Mind website is a great place to start. http://www.mind.org.uk/