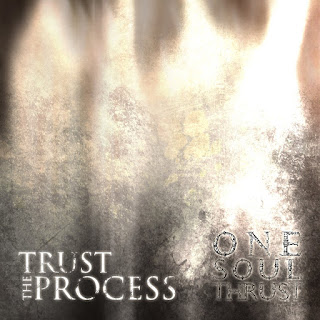 Susan Omand Trusts the Process and listens to the second part of the new album from One Soul Thrust...

Way back in the mists of, well, June actually, I listened to a six track EP, Hold the Vision, from my favourite best kept Canadian secret, the band One Soul Thrust. At the time it was explained that this was only the first half of their full album entitled Hold the Vision, Trust the Process with the second part to be released later in the year. Well, it is now later in the year and indeed, having Trusted the Process, Salem Jones and the guys were as good as their word and let me have a sneak listen to Trust the Process, their 5 track “part two” which comes out today!

So how does it sound? To be honest, I was going to do a track by track review and settled down, pen in hand, to take notes as I listened. However one track in particular took my attention and took up nearly three pages of notes on its own. We’ll get to that in a minute. For the rest of the album, it follows on fantastically from Hold the Vision. It’s not “more of the same,” it’s a natural progression, as the sound moves more from the rock to the metal end of the spectrum. I think the best way to describe it is having a darker tone, picking up on a few traits from the first half of the album and developing them. The percussion is heavier and much more complex, feeling almost experimental (in a very very good way) with several tempo changes within single tracks. The guitar-work too is a progression along a journey from the first half of the album. While remain at the same top class quality it is less intricate, more stripped back but more insistent and the melodies tend to take a minor key but always with Salem’s clear, lyrical and powerful voice being showcased. There is some amazing use of stereo throughout, especially on the first and third tracks as the sound moves from speaker to speaker very effectively, and listening through headphones is highly recommended. The track that the band have chosen for the single from this half of the album, Sweet Beast, is a perfect choice. It’s the last track on the album and picks up the upbeat sound from the first half again, effectively bringing the journey full circle, while still being the one that will appeal most to new listeners to the band.

However, I mentioned that one track on this album engendered much notepad scribbling and this is track 2, I Understand Nothing. This track... oh my gods, this track. This track had me standing up and pointing at the speakers in open mouthed awe as soon as it started. What a stunning intro, straight out of a Clint Eastwood movie!! The slow chime of a lonely church bell and a single bass guitar riff kicks in, playing what I can only describe as a melody-painting that evokes a wind-blown deserted Western town. It is a thing of beauty! You can “see” the tumbleweed, the cactuses and the cattle skulls above the swing door to the saloon where the lone cowboy stands, ready to fight.... I could go on and on about how evocative and beautiful it is and it goes on for a full minute. Just that. Wow. Adding to the beauty at that point is Salem’s voice over that single guitar riff – it made me literally cry, it was so wonderful. And then 2 and a half minutes in, a shimmer on the cymbals, so stunning that it puts a shiver up your spine, brings in the rest of the band and the chorus is so so satisfying rounding it off fantastically before it drops back again to a single guitar, Salem’s vocals and that cymbal again.

I could almost, ALMOST have forgiven the abrupt change in tempo as being a nod to the 2112 genius of the prog rock gods of Rush but, at 4 minutes 45 seconds,...

WHAT THE TINKLY-SPRINKLY-WIND-CHIMING HELL IS THAT?!

Had I heard this right? Had my favourite Canadian band actually done the musical equivalent of jumping the shark? Was that really an out of tune child’s musical box randomly splashing messy finger paints over my beautiful mental imagery? This was very nearly my new favourite song in the world, ever, (yes, even surpassing Purple Rain) and they went and did that. I. WAS. LIVID. And utterly let down.

I played the track to a friend of mine to make sure I wasn’t being over dramatic about this outburst, for indeed there was spluttering, swearing and drink spillage at this point. He likened it to Guns 'n' Roses’ November Rain, and not in a good way, in the sense that three quarters of the track was genius, totally ruined by suddenly and completely “going to shit” (he’s not a Slash fan admittedly). Then he made a comment that I think sums this song up fairly well and helped me to make sense of it in my head, “Yeah... I’m really not keen on the bonus track they added at the end of this track.” But even that doesn’t explain this tinkly music-box travesty. I don’t think anything ever will. That really was a step too far in the experimental stuff. “I Understand Nothing” is truly aptly named.

Thankfully though, that was the only issue (albeit a massive one for me) in another superb collection from One Soul Thrust. Buy both halves of the album and listen to them, separately and together, to experience the flow, hold the vision and trust the process of a wonderful band. It’s 95% perfect. And because of that, guys, I will try to forgive you the music-box chimes. Just don’t do it again, ok?

Editor note from Steve - let me jump in here and do some 'drumsplaining' for poor old Susan. You are absolutely correct about the 4 odd minutes at the start of this song, by the way this is the first time I've heard the band and only listened once so I'm judging only on this run through.

Stop looking for Rush in everything! They weren't that good, in fact one of the most overrated bands ever, and not everything will fit into your Neil Peart POV. What actually happened at the end of this tune surpasses anything Rush have achieved and knocks spots off November Rain. The track took one of the most UNIQUE turns I've heard in music... ever, and I'm the son of a professional musician and drummer myself. It was exquisite, it was different, it was musically quite beautiful, in fact, if I do have to find a fault and I tried hard to I'd say anything pre 4.30 in the tracks run-time was generic rock. Good rock but challenging? Different? No. From 4.30 onwards the band show a risk that I demand all musicians take from now on. Break down the walls of monotony, do something that makes someone point and open their mouth! On a side note... that singer has some lungs! Up there with Amy Lee and Stevie Nicks good.