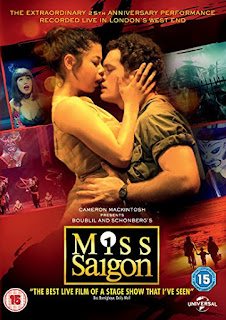 The heat is on as Ventspleen remembers the last time he saw Miss Saigon...

It's 1989 and the heat is on in.... well actually London, The Theatre Royal, Drury Lane to be exact. Miss Saigon is the hottest ticket in town and the winning team of Claude-Michel Schönberg and Alain Boublil just keeps smashing them out of the park (horrible metaphor, sorry.) The story of Madam Butterfly, given a modern and vicious twist by setting the story against the backdrop of the Vietnam war, has never looked more tragic. The brilliance of the staging and the heart wrenching and oh so memorable songs linger long after the curtain has fallen. The casting was perfect (Jonathan Pryce sublime as The Engineer) and audiences have never seen theatre on this scale before. After breaking all records for longest running show at The Theatre Royal (it eclipsed My Fair Lady) and after over 4000 performances it finally closed in 1999. I know Miss Saigon is a controversial show and dealing with the hell of Vietnam, let alone the issues of death and prostitution, but it deserved to run constantly in the West End. I guess the political landscape at the time meant that the heat was just too hot for Miss Saigon.

Miss Saigon opened on Broadway in 1991 and wowed audiences stateside before embarking on a multi city tour. As far back as 2011 I began to hear rumours of a West End revival and couldn't contain my excitement. Miss Saigon represents everything musical theatre should be and, in an age when the phrase "Must See" is bandied around far too much, it is a label that Miss Saigon should wear with pride. When the box office opened, Miss Saigon set a new box office record for first day sales (a staggering £4 million.) So, as the house lights go down and the ominous, threatening helicopter blades reverberate around the auditorium, the question I have to ask myself is this. Is the heat really on in Saigon? 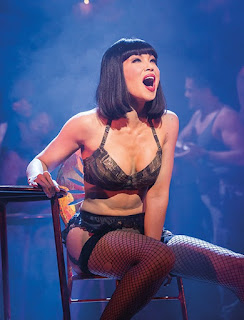 Yes, oh wow yes! From the first note of the overture to the final moment as the curtain falls, Miss Saigon is everything musical theatre should be and so much more. It is quite simply a theatrical event that is unlike anything I have ever seen on stage before. For musical theatre to work it has to engage the audience, it has to affect you, more than that, it has to change you. It's not enough that a show has an outstanding musical score or a breath taking set. Even securing an award winning cast cannot guarantee a show's success and, with new shows leaving the West End early an all too often occurrence, even revival shows have a hard terrain to traverse. In order for a show to garner the success it needs to survive (bums on seats, laddie, bums on seats) it must have all of these elements. Miss Saigon soars high above its rivals because it achieves what no other show does. There are no low points and at no point does the production drag or give its audiences a moment to catch their breaths. It is a full on, sometimes painful, assault on all of your senses. It is theatre that grabs you by your throat and threatens to throttle the life out of you.

Miss Saigon tells the tragic tale of Chris (a disillusioned G.I) and Kim (a tragically orphaned young girl) and their intense but flawed relationship. Flawed, not because of their differences, but because of a country that is tearing itself apart. With the departure of the American forces and the sinister, advancing, shadow of the Vietcong, the love that they share burns brightly with its intensity but, and at the same time, threatens to break with the external forces that are placed on it. Alistair Brammer's portrayal of Chris is simply outstanding and it is his pain that the audience feels (his rendition of Why God Why perfectly demonstrates his inner torment at being made to care for a land that he doesn't understand or care about) Eva Noblezada (Kim) delivers a breathtaking performance that ignites the stage both with its power and also deep tragedy. John (Chris's friend and colleague) is brought to life by Hugh Maynard and again we see a character that has been shattered by Vietnam. Maynard's vocal range is astounding and the power, yet at the same time, emotion he brings to Bui Doi means there isn't a dry eye in the house. 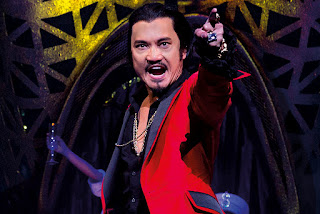 Miss Saigon is held together by one performance, one twisted and amoral character that seeks to profit on the misery he finds around him. The Engineer, owner and key holder to Dreamland and manipulator of the destinies of Kim and the other poor girls in his charge. Jon-Jon Briones performed in the original run of the show and is clearly loving every minute on stage as The Engineer. His performance during The American Dream is one of the most astounding moments of theatre I have ever seen. His hunger to travel to America and live the life he has always felt was his right underpins all of the tragedy and is the lynch pin to Miss Saigon. It is my hope that the original cast are not planning to leave Dreamland any time soon as they ensure Miss Saigon has the strongest and most accomplished company on stage anywhere in the West End today.Every single character within the show is shrouded in tragedy. Even The Engineer himself, as manipulative and powerful as he is, is a victim of a country that he just does not fit into. Bitterly singing "Why was I born of a race That thinks only of rice and hates entrepreneurs?" (If You Want to Die in Bed) Chris and Kim, ripped apart by the end of a war that everyone is struggling to comprehend and the girls, trapped in Dreamland, desperately selling their own bodies to win a visa. "In a world where nothing is real" the love the couple share is one of exquisite beauty despite its brevity.

But Miss Saigon also showcases character development and, in some cases, redemption, Act Two opens with a returned John campaigning for the children "whose only sin was being born" These children, or Bui Doi (the dust of life) live a tortured life as they are unable to hide their american heritage. John's life is transformed by the haunting and nightmarish memories of a war which will never be forgotten, yet, rather than allow himself to remain a victim, he strives to better the lives of the children. "They are the living reminder of all the good we failed to do" Here is theatre that changes you, we all have a past and a history which has elements of tragedy. Some more than others, yet we all have a choice. Do we allow ourselves to be in chains to the demons of the past or do we allow our past to shape us and forge us into better people? Tortured souls we may be but in chains, only if we choose to be. For some, musical theatre is a closed book. Singing in the face of death, singing through your pain is something that is not easy to understand. Miss Saigon works, as all good musical theatre should do, on many levels. Enjoy the spectacle, enjoy the flawless staging or the vocals that echo long in your ears. Yes so true and completely for weeks later the movie in my mind still plays. Yet and on a deeper level, Miss Saigon speaks to our very souls and our hearts. Hear the plaintive, mournful "song played on a solo saxophone" and there is a connection made at our very core. Yet, just when we are threatened with despair, Kim sings "I still believe."

Miss Saigon was playing in the heart of Soho at the magnificent Prince Edward Theatre and long may the full houses continue. It is a piece of theatre which should never leave the West End and should be experienced by everyone. "The heat is on in Saigon" and it is burning with an intensity that does not seem likely to be extinguished for a long time. Welcome back and please don't leave us again!