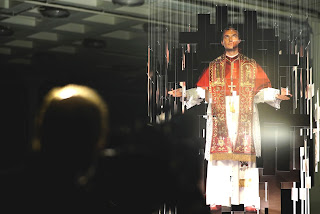 Sky has teamed up with American sculptor Michael Murphy to unveil an incredible multi-dimensional sculpture of Jude Law as the controversial Pope he plays in The Young Pope...

Artist Michael Murphy famously created the first portrait of Barack Obama when the current President of the United States of America was a candidate in the 2008 Presidential Election. Now, using the iconic imagery of Jude Law as Lenny Belardo and Pope Pius XIII. Michael has created ‘Saint. Sinner. Pope. Man.’ a 360-degree sculpture which shows the many conflicting sides of Lenny’s personality.

To make this complex sculpture of Jude’s character, Michael painstakingly hangs 100 crosses which contain fragments of the image, creating a different perspective from every side. This style of art creates a ‘Parallax’ effect: allowing the viewer to see Jude’s multi-faceted character in a multi-dimensional space. Weighing 250 lbs and over three meters tall, the suspended sculpture took Michael a month to design and around 500 hours to make. Made of photo prints on dibond, the sculpture took over 10 hours to build.

Michael began by working with projections and now he uses sculptural surfaces to create more permanent work - a genre he describes as ‘perceptual art’.

Michael Murphy commented: “I’ve been waiting years for the right opportunity to employ this four sided illusion technique. When tasked by Sky with the portrayal of the dynamic character of Jude Law’s Lenny Belardo in The Young Pope, I knew this was the moment I had been waiting for.”

Zai Bennett, Director of Sky Atlantic said: “What an incredible way to celebrate the launch of The Young Pope this week on Sky Atlantic. In this work, Michael Murphy has perfectly captured the different sides of Lenny Belardo, played exceptionally by Jude Law.’

Young and charming, Lenny’s election might seem the result of a simple and effective media strategy by the College of Cardinals. But, as we know, appearances can be deceptive, especially in the place and among the people who have chosen the great mystery of God as the guiding light of their existence.

That place is the Vatican and those people are the leaders of the Catholic Church. And the most mysterious and contradictory figure of all turns out to be Pius XIII himself. Shrewd and naïve, old-fashioned and very modern, doubtful and resolute, ironic, pedantic, hurt and ruthless, Pius XIII tries to walk the long path of human loneliness to find a God for mankind. And for himself.

Watch the video of the making of the sculpture below.