News - The Watchers In The Wings 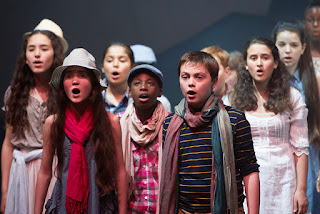 How do you get people to experience opera? Let their kids have fun with it first...

With half-term holidays either just starting or just finished (or, for some lucky parents, half way through a two week stint), the task of keeping the little darlings entertained is very much on every parental mind. But I bet very few of you will even think of introducing your kids to opera, probably because it’s not something you’d even consider for yourself – here’s something that may help.

The Royal Opera has released their latest project onto YouTube for everyone to watch. The Watchers in the Wings is a newly commissioned four-minute opera by successful children’s author Steven Butler (The Diary of Dennis the Menace) and award-winning composer John Barber.

Filmed on location at the Royal Opera House, The Watchers in the Wings tells the story of a group of schoolchildren who find themselves whisked away on an adventure through the building, with a little help from a mysterious and enigmatic Tour Guide.

This commission aims to introduce younger audiences to the sound world of opera, and to showcase the versatility of the art form through a vibrant performance on a digital platform.

Kasper Holten, Director of Opera for The Royal Opera, commented ‘This has been a fantastic collaboration for us, working with new friends in the music video industry on a brand new opera for young people. It’s really important for us to find new ways of introducing opera to another generation.’

The digital opera short is produced by award-winning video production company Kode Media, who have previously created music videos for Sam Smith (Stay With Me), Mumford and Sons (Whispers in the Dark), Coldplay (The Scientist) and Mark Ronson (I Can’t Lose). The opera stars children from the Royal Opera House’s Youth Opera Company aged between 9 and 13 years of age, performing alongside British tenor Paul Curievici.

The Youth Opera Company is a 50-strong group of diverse, talented children aged 9 to 13 years old. It was established in 2010, following an extensive series of workshops involving more than 400 children from various backgrounds and regardless of previous experience, who had discovered a passion for singing through school projects run by the Royal Opera House and other organizations with a commitment to learning and participation. What they have in common is real potential as singers and actors; potential that they discover and develop through being part of the Company.