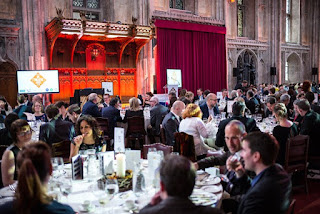 This year's UK Theatre Award winners have been announced...

Nominated for 9 different awards, the big winners yesterday at the UK Theatre Awards were Sheffield Theatres who took home a total of five of the awards, including both Best New Play and Best Musical Production, at yesterday's ceremony which took place at London's Guildhall. The awards were compèred by Lesley Manville, with a performance from the award-winning Clare Burt and appearances from guest presenters including Dame Eileen Atkins, Owen Teale, Laura Pitt-Pulford, Stephanie Beacham, Don Warrington and Preeya Kalidas.

Other notable winners on the day were Paapa Essiedu, who picked up Best Performance in a Play for his role of Hamlet in the Royal Shakespeare Production at Stratford upon Avon, and Northern Ballet, up for 3 Awards, who took home the title of Achievement in Marketing for their work on 1984 (read our review of the ballet here).

Two special awards were handed out at the ceremony, with the Outstanding Contribution award going to Sir Ian McKellen and the John Gielgud Award for Excellence going to Vanessa Redgrave.

The annual UK Theatre awards are the only nationwide awards to honour and celebrate achievements in regional theatre throughout the UK and do not cover National Theatre productions or West End shows unless they have transferred from a theatre outside the capital.

Full lists of nominees and winners can be found below.

Best Show For Children And Young People
THE HOBBIT, a The Dukes production

Best Performance In A Musical
Clare Burt for FLOWERS FOR MRS HARRIS, a Sheffield Theatres Production

Achievement In Opera
The Royal Opera and Guildhall School Of Music and Drama for 4.48 PSYCHOSIS in association with the Lyric Hammersmith

The Gielgud Award For Excellence In The Dramatic Arts
Vanessa Redgrave