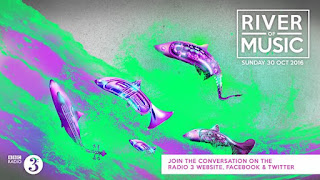 Do radio ads rile you and inane announcers annoy you? BBC Radio 3 will broadcast 12 hours of music WITHOUT ANY SPEAKING for the first time ever, as part of its 70th anniversary celebrations...

Radio 3 has announced that for 12 hours on 30 October, the station will temporarily abandon its usual programming for River of Music, the longest ever continuous music broadcast on BBC Radio. This unique, historic broadcast will see an expertly curated playlist of 70 pieces played between 9am and 9pm without any speech at all, as part of the celebrations around the 70th anniversary of Radio 3’s predecessor the Third Programme.

While the river flows on-air, online there will be a full listing of all the music played. Listeners can be part of the conversation about River of Music by following Radio 3 on social media platforms and contributing to a live blog on the Radio 3 website, hosted by Essential Classics presenters Sarah Walker and Rob Cowan. Expect insightful commentary on every work played as they share their own experiences of being part of River of Music. A host of images, videos and features will be posted by Radio 3 throughout the day.

Taken from across the huge spectrum of music championed by Radio 3 and the Third Programme since it launched in 1946, the music played will encompass a huge range of genres, from classical to jazz, world, medieval, electronic, and even TV scores. The full playlist, which will not be revealed until the broadcast, contains works which are each connected to a particular year and a historical, political or cultural happening with musical resonance at the time.

Some modern-day giants of classical music have contributed favourite works to the broadcast which they regard as ‘game-changing’. Videos of these legendary artists introducing their choices and explaining their influence on their careers and personal lives will be available online. Sir Mark Elder tells us about Elgar’s The Apostles, Dame Emma Kirkby the Ave maris stella of Monteverdi’s Marian Vespers, Oliver Knussen chooses Berg’s Altenberg Lieder, Gabriel Prokofiev introduces Stockhausen’s Stimmung and the late Sir Neville Marriner discusses his own critically-acclaimed recording of Elgar’s In the South with the Academy of St Martin in the Fields.

Radio 3 Controller Alan Davey says: “When the Third Programme first took to the airwaves, one of its founding aims was to connect audiences with remarkable, undiluted music and culture of all types, without being too constrained by a rigid schedule. Over the next seven decades, the Third – and then Radio 3 – would become known for regularly putting out long works of music and drama in full, and broadcasting every single BBC Proms concert each year. In devoting a whole day of programming to an uninterrupted stream of music, River of Music is a continuation of this philosophy, and shows that the pioneering spirit of the Third is alive and well in Radio 3.”

For more information about River of Music, visit the page on the Radio 3 website. The entire broadcast will be available for 30 days on Listen Again.