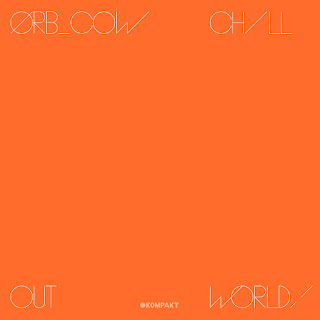 You want something different to listen to? Something that will blow your mind and wind you down both at the same time? You need to listen to The Orb's new album Chill Out World and you can, in full and for free, thanks to Kompact, before it is released on CD and vinyl tomorrow...

If you know The Orb at all, you know a track from The Orb when you hear it. COW (or Chill Out World) is no exception - a masterful ambient album that uses unexpected sounds, both natural and electronic to make insidious music that moves around your speakers and your head in an intensely relaxing and satisfying way.

So who or what is The Orb? Formed in 1988 by Dr Alex Paterson and ex KLF member Jimmy Cauty, The Orb began as ambient and dub DJs in London. Their early performances were inspired by ambient and electronic artists of the 1970s and 1980s, most notably Brian Eno and Kraftwerk. The Orb soon developed a cult following and has maintained their trademark "spaced out" drug-related and science fiction themes despite numerous personnel changes, including the departure of Cauty. Paterson has been the only permanent member throughout the group's existence, continuing to work as The Orb now with the Swiss-German producer Thomas Fehlmann, with whom this new album was created.

"The idea was simply to make an ambient album", Dr Paterson explains, "we didn't look back and study earlier recordings, but wanted a more spontaneous approach, a focus on The Orb today, our vibe in 2016." The new album was produced over the course of only five sessions in six months, rather than the six YEARS it took for their previous offering, and Dr Paterson added "it got so spontaneous that a track like 9 Elms Over River Eno (Channel 9), which consisted only of material collected at North Carolina's Moogfest in May – second-hand records from local stores, field recordings, live samples from gigs that we liked, and of course an excursion to the Eno River, which actually exists. This geographic intimacy and the spontaneity are among the top reasons why we love this album so much."

Herr Fehlmann sees the duo's relentless gigging schedule as a formative influence on the new album: "the countless performances we've played in the last years - probably up to 300 - have brought us closer as a musical unit. The spice of our concerts is improvisation - a fertile process that we’ve brought to the studio, where we operate with very simple rules of engagement (in this case "ambient") and go wherever the flow takes us." It's an approach that one might expect from traditional acoustic instrumentation, not necessarily an electronic set-up, but for The Orb it works wonders: "we're quite happy and also a little bit proud that we've reached this level of unscripted levity with purely electronic means. We're finessing ourselves, sort of, always looking for the next sonic surprise that leaves us rubbing our eyes about how the heck we got there."

Described as "a compelling, immersive journey to diverse places and impressions", each track title is a conceptual artwork in its own right, playing with multiple references, each being completely different, completely experimental and so completely The Orb.

You can listen to the whole album now on Soundcloud below and buy it from tomorrow on CD/Vinyl.