News - The Man Who Fell to Earth 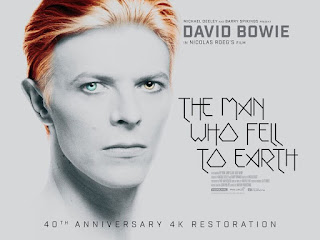 We're Loving the Alien as David Bowie's debut film role gets a 4k makeover and a load of extras for its 40th Anniversary...

Mary-Lou: Gin? A nice gin and tonic with four cubes of ice and a slice of lime. Hmm. How's that sound mister?

Yes? Maybe you'll be interested in this as well. To mark the 40th anniversary of the UK release of director Nicolas Roeg’s iconic science fiction odyssey, The Man Who Fell to Earth, Studiocanal has announced a new 4k restoration of the cult classic starring the incomparable David Bowie.

The film, released in cinemas last month, is going to be available on Download, DVD, Blu-Ray and as a Collector’s Edition from 24th October by Studiocanal, complete with brand new bonus material and special packaging, as part of their Vintage Classics range.

Exclusive to the Collector’s Edition will be a bonus John Phillips CD, a booklet with essays on the film and the soundtrack, 4 stunning, collectable art-cards, the press book and an A4 poster of the brand new theatrical artwork.

As part of the restoration process on The Man Who Fell to Earth, a transfer of the original session tapes was undertaken, with each track expertly remastered. As well as the music that made it onto the final cue sheet, this exclusive CD also includes 2 bonus tracks, which do not appear on the new UMC soundtrack – Hello Mary-Lou (with vocals) and Bryce.

The original soundtrack album has also recently been released for the first time by UMC. A 2CD set is available now and a 2LP and Deluxe 2CD/2LP Box Set will be released on 28th October. David Bowie was originally due to record the soundtrack but Nicolas Roeg decided the direction he was going in didn’t fit the film and, so, hired The Mamas & The Papas’ John Phillips instead. Rumour has it that the tracks Bowie wrote for the film formed the basis of his albums STATION TO STATION and LOW, both recorded in the years after the film’s release and featuring stills from The Man Who Fell to Earth as their covers. 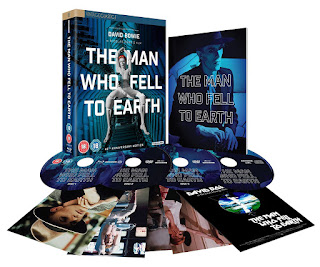 Restored by Deluxe London, the restoration of The Man Who Fell to Earth is based on a 4K scan of the original camera negative, followed by a full 4K workflow, with the approval of Nic Roeg and the assistance of cinematographer Anthony Richmond ASC, BSC who was closely involved in the new grade. Richmond says: “I had been disappointed with previous editions of the film for which I hadn’t been involved in the grading process. The colourist Steve Bearman and I have brought the new 4k restoration in line with the original film print. I felt that certain scenes were lacking that look and feel. Probably the biggest change is early in the film where David Bowie is sitting by the riverbank drinking water and looking at the rings. We warmed it up and made it match the print. I also felt the interiors all had a little too much Magenta in them so we took that out. The other changes were very subtle."

Featuring a startling and era defining lead performance from David Bowie (The Prestige, Labyrinth) in his first film role and based on the cult novel by Walter Tevis, The Man Who Fell to Earth endures as, not only a bitingly caustic indictment of the modern world but, also, a poignant commentary on the loneliness of the outsider.