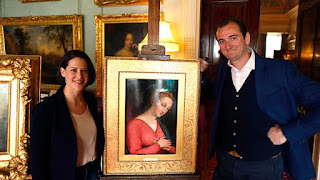 A lost painting, believed to have been created by Raphael, has been discovered in Scotland's Haddo House - a former home of the Earls of Aberdeen...

The painting, which shows a Madonna with clasped hands, is believed to have been painted by Raphael between 1505 and 1510 whilst the artist was in Florence. It was discovered by art historian Dr. Bendor Grosvenor during production of the BBC Four series, Britain's Lost Masterpieces.

Dr. Grosvenor first became aware of the existence of the painting on the Art UK website. Now dubbed 'The Haddo Madonna', the work formerly belonged to former Prime Minister George Gordon, the 4th Earl of Aberdeen, who acquired it in the 19th Century as work by Raphael. The painting was even exhibited as a work by Raphael at the British Institution in 1841. However, soon after Earl's death in 1860 the painting came to be regarded as a copy - in 1899 it was valued for as little as £20.

The Haddo Madonna however, as Dr. Grosvenor identified, is not a copy of any other known Raphael composition. Furthermore, close inspection of the painting revealed a 'pentimento', or alteration, in the Madonna's right hand - a sign of original creative intervention. A crucial clue was the discovery of a related drawing by Raphael, which may have served as a preparatory study for the painting.

Dr. Bendor Grosvenor says, "Finding a potential Raphael is about as exciting as it gets. At first I couldn't quite believe it might be possible, but gradually the evidence began to all point in the right direction. This is a beautiful picture that deserves to be seen by as many people as possible. I hope the Haddo Madonna, which would be Scotland's only publicly owned Raphael, can now be examined and assessed by a wider field of Raphael scholars."

At first, the true quality of the painting was difficult to assess, with layers of overpaint, dirt and old varnish obscuring the original paint surface. But cleaning and restoration of the painting, undertaken for the programme, revealed a work of extraordinary quality, with a number of stylistic and technical similarities to accepted works by Raphael. Infra-red photography also showed confident under-drawing, especially in areas such as the hands.

The attribution to Raphael has been welcomed by Sir Nicholas Penny, the Raphael scholar and former director of the National Gallery, who discovered Raphael's Madonna of the Pinks in a corridor at Alnwick Castle. That painting was acquired by the National Gallery in London in 2004 for £35m.

To advance such an important new attribution, the picture must now be made available to art historians for wider analysis and scrutiny. The painting belongs to the National Trust for Scotland, and hangs at Haddo House in Aberdeenshire. Haddo House was home to the Earls and Marquesses of Aberdeen, the most famous of whom was the 4th Earl, George Gordon, Prime Minister from 1852-1855.

Britain's Lost Masterpieces is presented by Dr Bendor Grosvenor and Jacky Klein and this episode can be seen on BBC Four tonight at 21:00 or tomorrow morning at 02:45