News - George Shaw: My Back to Nature 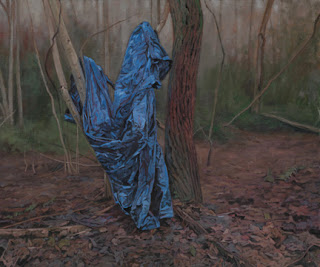 Just a few days remain to see the critically acclaimed George Shaw: My Back to Nature at the National Gallery, London (on until 30th October), before the exhibition embarks on an 18-month nationwide tour...

'My Back to Nature' – a free exhibition of more than fifty new paintings and drawings – is the result of George Shaw’s two-and-a-half years as the National Gallery’s Rootstein Hopkins Associate Artist.

With several solo exhibitions and a Turner Prize nomination behind him, Shaw had swift and unrestricted access to the Gallery to explore the collection out of hours at his leisure, draw from the pictures, observe the public, and find inspiration in great art for his own work from his base in a studio located in the heart of the National Gallery. The result is predominantly woodland landscapes, ones that investigate the clash of cultures; classical stories linked with the traces of similar, timeless behaviour in the modern world; and the portrayal of religion.

National Gallery Director Dr Gabriele Finaldi, said, "George Shaw’s paintings tap into popular British culture and the tradition of the great masters. The result is by turns witty, moving, and irreverent. The body of works he produced at the National Gallery offers a fresh and energising response to the paintings of Titian, Poussin, and Constable and we are delighted to share it with so many UK venues.”

Image - George Shaw, 'The Living and the Dead', 2015–16 © The Artist and Wilkinson Gallery, London
Email ThisBlogThis!Share to TwitterShare to Facebook