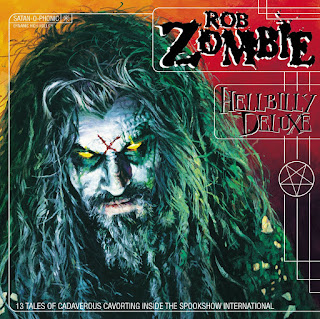 AlbieMedia's Song of the Day (SotD) is our choice of a single or album track that we think you need to hear. Today Reece Morris-Jones goes full Zombie...

Readers of a certain age are already humming the tune...

It may just be that there's a new Rob Zombie film out but there's something in the air that makes me feel like revisiting this curio. As both a singer and director, Rob Zombie has always been an intriguing mix of talented and tone deaf; able to imbue his meat-and-potatoes art with a depth you wouldn't expect.

The music video for Dragula is a perfect example. Originally, it wasn't even going to be included on the album Hellbilly Deluxe - it was added as an afterthought. Yet its simple, propulsive and slightly groovy style ensured it went on to become Rob Zombie's highest selling single.

This single also marks the birth of a unique directorial style. Shot by Zombie himself, (who two years later would go on to direct Never Gonna Stop) it contained the core elements that would go on to become the staples of all his future work; an adoration of low-budget horror, striking visuals and (much to some fans chagrin) his wife Sherri-Moon Zombie. It's ensured he's still around in a time when his musical contemporaries have long since bit the dust or had to hit the nostalgia button to survive.