Review - Under A Banner, The Wild Places 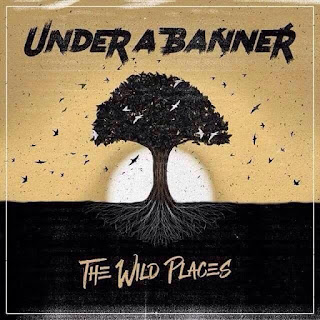 Nate McKenzie heads for The Wild Places as he listens to the new album by Under A Banner, out on Friday...

Upon taking a thorough first listen-through of The Wild Places, the newest album from U.K. Indie band Under A Banner, I was bewildered by not having come across them before because, surely, they must have been around for something close to a decade. At least. Not so, however, as I discovered the band is only some four years old. The entirety of The Wild Places feels like the finished product of an extensive, intrepid journey rather than only the third full-length album. This is a reminder, then, that the length of a journey is not measured in time but in the experiences endured and incurred.

The diversity of the sounds and arrangements of each song on Places is its bedrock. The bloody, pulsing heart of the emotion emulated is what drives the album and ultimately ensconces your every sense.

Rare it is to come across an album that instantly connects to something within you, like a hidden, frayed wire that suddenly sparks upon contact. The Wild Places is that connection sparked, creating an incendiary commotion that becomes a raging flame that can't be doused. From the warm, comforting embrace of the opening track, In the End, to the powerful title track that pounds in your head for hours after listening, each song is its own full length story, but together are the culmination of a hard road ridden and lessons begged to be heeded. It is easy to understand why Snow Song is the featured single from the album, however, as it showcases the multiple strengths of the band: poetic lyrics, a crisp, racing tempo, and a breakdown meant only to build you back up and seduce you all over again with silver-tongued guitar licks. If you only have five minutes to get a feel for the band and what they have to offer, give that particular track a listen. If you're not hooked, you weren't paying attention.

I covered numerous singles over the summer that were perfect for the season. The Wild Places is a perfect album for Autumn. As the air begins to bite and the sun moves farther from the Northern Hemisphere, the effulgent passion that Under A Banner imparts with each of the twelve tracks should provide requisite warmth, whether that warmth comes from the heat of love or hate, passion is passion. The Wild Places has both and the rest of the spectrum in spades.

The beauty of it all is that, great passion always burrows deep and persists. So too, I believe, will Under A Banner and The Wild Places.

Image - Under A Banner