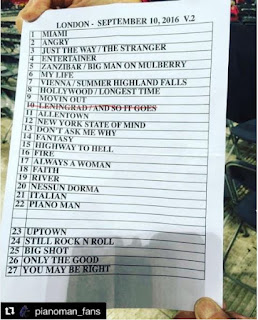 Steve Taylor-Bryant went Uptown but didn't have to wait For The Longest Time to say "It's Still Rock n Roll to Me" at last weekend's Billy Joel gig in London...

I've been lucky enough to have seen Billy Joel on a number of occasions and, whether he's performing in a bar or a stadium, he's the only artist I know that can make it intimate regardless of audience size. Wembley Stadium though is a huge venue, my first visit to the new version, and I was worried that the size and inclement weather might have a bearing on the enjoyment. I needn't have worried.

From the opening notes of Miami 2017 to the closing chords of You May Be Right, the band and audience went on a journey through 40 years of the piano man's repertoire. From classic up tempo hits like Uptown Girl and We Didn't Start The Fire to beautiful slower numbers like New York State of Mind and She's Always a Woman there was plenty for the fans to enjoy. Billy was on good form with his humour, tales of divorce after a love song, dedications to Donald Trump and little pokes about Brexit, and a fantastic impression of Elton John ("I don't have much money... Really Elton? No money?"), and his trusty fly swatter made for great between tunes entertainment. The crowd were involved in song choices with Billy's "fielders' choice" and whilst I only got one that I wanted, Leningrad, let's face it no one minded hearing Zanzibar or Just The Way You Are again. Chainsaw the roadie came out with his rendition of AC/DC's Highway To Hell, the crowd were in good voice for Rule Britannia and the mingling of The Beatles' Hard Days Night and some Led Zeppelin into Billy's own classics was amazingly good.

The band are all top musicians and with the likes of Mark Rivera who has been a part of Billy's band for as long as I've been alive and the incredible Crystal Taliefero you were always going to be in for a treat but there is one guy who needs as much recognition as Billy himself and that is Mike DelGuidice. Not only a superb back up vocalist and guitarist but I had tears in my eyes and goosebumps when he performed Nessun Dorma like one of The Three Tenors would have.

What an amazing night of music from a man who doesn't perform like he's 67 and can still fill stadiums despite it being decades since any fresh material was released. A true songwriter, a magical singer, a showman who can tug your every emotion. Thank you Mr. Joel. From Angry Young Man to Piano Man you rocked my world.