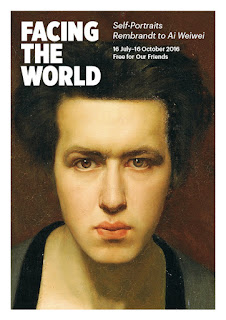 Susan Omand discovers a video discussion on unconventional self-portraits thanks to National Galleries of Scotland...

I've discussed portraiture on here before, looking at how the sitters wished to be perceived in their portraits and the status of having one's portrait painted in the first place. I also mentioned self-portraits in the same article, noting the fact that very few artists showed themselves clearly in their own self-portraits, exceptions being Van Gogh, who often could not afford a different sitter, and Rembrandt, who went into minute detail to document his own ageing process rather than for reasons of vanity. So I found this little film from National Galleries of Scotland on self-portraits fascinating, especially when it looks at the depiction of the self in less conventional self-portraits, discussed from the viewpoint of an art critic, an artist and a forensic anthropologist. It ties in with the exhibition on self-portraiture currently on at the Scottish National Portrait Gallery in Edinburgh and puts forward some thoughts on the truths behind the self-portrait an artist chooses to create.

The main thing that never struck me before watching this film is the thought that, with a self-portrait, an artist is portraying how they see themselves, so the end result a much more thought provoking picture than a portrait of someone else. Whereas a portrait will capture a physical likeness, however flattering or otherwise, of the sitter, it does not often get below the "face" that the sitter puts on, how they want to appear to the world rather than their true "self." It does not expose their thoughts, hopes, fears, all those intangible elements that make a person who they are because, no matter how intimately the artist knows the sitter, something will always be held back. A self-portrait on the other hand can dispense with the physical "how we look" and connect with the "self" on a deeper level because the artist knows their own mind, their own spirit and can work to convey that rather than a physical representation. This would explain my earlier observation about artist's self portraits often appearing shadowy or abstract - it doesn't matter to them. Well it interested me, not least because I have a painting of my own on my wall that looks nothing like me and was never meant to but I have come to regard it as a deeply personal self-portrait and will never let it go.

Anyway, read the synopsis and watch the little film below, it's only about five minutes long, and let me know what you think.

Artists have always created self-portraits. Whatever their motivation (as a showcase for their talents, a political statement or a conscious projection of their best self), the result is always the same: the creator becomes the subject, and the artist become the sitter. Many artists have subsequently created self-portraits by omitting the most recognisable part of their bodies: their face, and have instead explored their ‘self’ in more conceptual ways. But how truthful are these representations of self? And does it even matter?