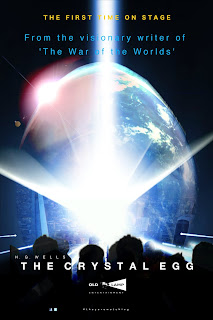 VentSpleen gets Egg-cited by the idea of a theatre company bringing H G Wells' The Crystal Egg to the stage...

“No one would have believed in the last years of the nineteenth century that this world was being watched keenly and closely by intelligences greater than man's and yet as mortal as his own; that as men busied themselves about their various concerns they were scrutinised and studied, perhaps almost as narrowly as a man with a microscope might scrutinise the transient creatures that swarm and multiply in a drop of water.”

Before Jeff Wayne, before "that' radio broadcast and actually before even the 20th Century, H G Wells wrote a book. The book, you may remember, was a medium that we used to widen our horizons and embiggen our lives. Before the invention of Kindle and electronic entertainment people used to write and what they wrote was read.

War Of The Worlds was just one of H.G Wells masterpieces and there were many, oh so many. But for a young boy just beginning his fantastical literary journey it rocked my tiny little world. The story of a massive and expertly planned Martian incursion was immense in its scale and utterly devastating. What separates Wells telling of this story was that it was conveyed through the eyes and words of a journalist and this added a horrific level of realism to it. When I read War of the Worlds I could actually see the devastation, the loss of life, and I could feel the despair when the valiant Thunder Child was sunk.

I am a huge Jeff Wayne fan because he incorporated the brilliance of Wells' writing with incredible sound and music and the Gene Barry, starring, film in 1953 still remains one of my top 10 films of all time. But it was the 1938 radio broadcast that really demonstrated the brilliance of Wells talent. To effectively dupe an entire nation that what they were listening to was a real news broadcast lifts his creation to a new level of inspired. You can argue that now it wouldn't happen and a quick Google search would reveal the truth or that the paranoia caused by an act of War was at its highest. Whilst these comments have an element of truth they should not detract from the sheer writing genius of Wells or the enduring affection that War of the Worlds causes within us.

I discovered the short story The Crystal Egg a few years after first reading War of the Worlds and it is a find that I shall never forget. Published before the more familiar work and at a time when War of the Worlds was being serialised it is a prequel of sorts. Whilst The Crystal Egg does not mention what is to come I was aware that the shadowy and powerful Martians had been watching and planning mankind's downfall. I had always assumed that this had been from afar but the reality was so much more horrific. It is not clear whether Wells designed The Crystal Egg to be a prequel but the fact remains it does provide an added level of horror to what was to follow. Ever since reading it I had always wondered what a stage production would look and feel like. Would it retain the feel and realism of the book and convey at the same time the other worldly and unearthly qualities? Soon I won't have to wonder any more.

Yesterday, on Wednesday 21st September, to coincide with H.G Wells' 150th Birthday, Old Lamp Entertainment launched a crowdfunder that is destined to bring this masterpiece to the stage and a new audience. You can be one of the first people to invest and become part of a stage adaptation that will never be forgotten.

#TheyAreWatching and now, so are you.