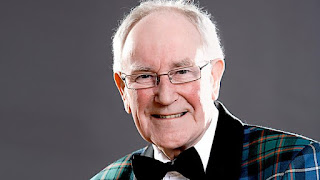 Scottish broadcasting legend Robbie Shepherd MBE is saying farewell to Take the Floor, the BBC Radio Scotland Show he has presented for 35 years...

[Editor's note - for many people around my age, a Saturday evening at home meant the family gathering round the TV in the sitting room to watch Doctor Who, The A-Team or Knight Rider. For me, the family (me, my mum and my dad) gathered in the kitchen on a Saturday evening for a large dram, the weekend cryptic crossword in the Press and Journal and a listen to Robbie Shepherd presenting Take the Floor on the wireless. Susan.]

The octogenarian - renowned for his passionate support of Scottish traditional music and the Doric dialect - has decided to step down from the programme, which is the longest running show on Scottish radio.

In a special edition of Take the Floor, being broadcast on Radio Scotland tonight, Robbie will say his final “Be looking for ye and a’ the best” sign-off.

Tributes paid to Robbie in his final Take the Floor range from Sheena Wellington to Dougie MacLean, Karen Matheson and Jimmy Shand Junior among others.

BBC Scotland Director Ken MacQuarrie said, “Robbie is one Scotland’s most recognisable voices and, over the years, he has been like a close family friend for many of our listeners. A passionate supporter of traditional Scottish music, Robbie has, over more than three decades, shared his in-depth knowledge and his infectious enthusiasm with generations of Radio Scotland audiences. I’d like to thank him personally, both for his work with Radio Scotland and also for his passionate commitment, championing Scottish traditional music across the country. Although we’re grateful that he’ll continue to work for us on one-off broadcasts in future, we wish him well as he prepares to Take the Floor for the final time.”

Born in Dunecht in Aberdeenshire in 1936, Robbie ventured first into theatre, compering and producing variety shows, with names such as Calum Kennedy and Andy Stewart before branching out into broadcasting. As well as Take the Floor, he has also presented The Reel Blend for Radio Scotland, and has in his time compered Beechgrove Garden roadshows and presented sheepdog trials.

Over and above his broadcasting work he has written books on Scottish dance music and Scottish country dancing, and has a regular column in Doric for the and is a vocal champion and compere at many Highland Games.

His contribution to Scottish traditional music, to Doric and Scottish culture generally, was recognised in 2001 with an MBE and also an honorary degree from the University of Aberdeen in the same year.

Taking the helm at Take the Floor over the autumn will be Gary Innes, musician and former shinty internationalist, who said:“ I’m overwhelmed to be borrowing the shoes from such a Scottish icon.”

Robbie Shepherd says: “It has been 35 years of top class music. From the great masters of the past to present day performers, Scottish dance music continues to be a vibrant scene. So the time has come for me to hand over to a younger presenter and wish the Take the Floor team a’ the best. I would also like to thank the many hundreds of musicians, whose music we’ve featured, and the audiences, in halls at our recordings across the country, who have provided a great atmosphere for the show."