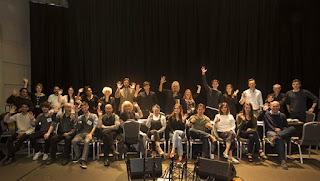 This December, Radio 4 brings Neil Gaiman’s spellbinding tale Stardust to listeners and they want your artwork for the radio broadcasts...

To celebrate the new two-part dramatisation of Neil Gaiman's Stardust by audio guru Dirk Maggs, Radio 4 is inviting budding artists and fans alike to create and submit an evocative image that captures the story of Stardust.

The competition is now open and closes on Wednesday 26th October. Given the wide fan base, there are two categories - one for those aged 13-16, and one for those over 17.

The two winners will have their work featured as the episode image for the drama, win a script signed by the cast at the recording of the drama and receive an art print donated by Neil Gaiman with a personal note from him. A selection of the best entries will also be showcased on the Radio 4 website.

Entries will be considered by four judges. They are:

Artist Chris Riddell - UK Children’s Laureate, political cartoonist for The Observer and illustrator for a number of Neil Gaiman stories
Actor Sophie Rundle - As the female lead Yvaine in Stardust, Sophie is close to the spirit of the Stardust story
Artist Sean Phillips - Sean has been a professional illustrator for over twenty-five years, mostly drawing comic books. He was the main artist on Radio 4’s Good Omens and has also worked for DC, Marvel, Vertigo and 2000AD
Jeremy Howe, commissioning editor for Drama at Radio 4

Jeremy Howe says: “Of course the pictures are always best on radio, but I am really looking forward to seeing how our listeners respond to the imaginative wonderland that is Neil Gaiman’s magical Stardust, and I’m honoured to be on the same judging panel as Chris Riddell, Sophie Rundle and Sean Phillips.”

Challenged to retrieve a fallen star by the beautiful Victoria Forester, to whom he has lost his heart, Tristran Thorn leaves his home in the sleepy English village of Wall and crosses into the mysterious and magical land of Fairie. But when Tristran locates the fallen star he discovers it is no mere meteorite, but a young woman, Yvaine.

Tristran is however not the only person to have seen and be in pursuit of the fallen star. With Yvaine’s life in danger, she and Tristran find themselves embarking on an extraordinary adventure. Encountering Little Hairy Men, witches, and lightning-hunting sky pirates along the way, Tristran is about to uncover the secret to his own identity and a fate beyond his wildest dreams at his journey’s end.

Stardust is not the only Neil Gaiman story to be adapted for radio this year. In November BBC Radio 4 celebrates Neil Gaiman’s magic with his short story How the Marquis Got His Coat Back.

Gaiman’s Neverwhere universe is the setting for the story, adapted for Radio 4 by Dirk Maggs.

Paterson Joseph once again dons the mantle of the Marquis de Carabas, which he first wore twenty years ago in the 1996 BBC TV dramatisation of Neverwhere. He is joined by Adrian Lester (Undercover, Hustle), Don Warrington (Death in Paradise, Rising Damp), Mitch Benn (Good Omens, The Now Show), Divian Ladwah (Detectorists) and Bernard Cribbins reprises his role of Old Bailey from the Radio 4 production of Neverwhere, with two more surprise cameos yet to be announced.