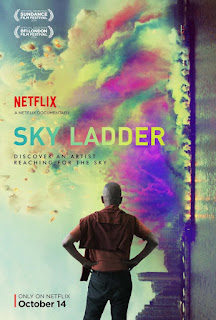 Ahead of its European premiere next week on October 7th at the London Film Festival, watch the trailer for the truly explosive art documentary Sky Ladder...

Acclaimed filmmaker Kevin Macdonald (Last King of Scotland, Touching the Void) has unfettered access to world-renowned artist, Cai Guo-Qiang, whose frequent use of gunpowder serves as both an ancestral homage and an acknowledgement of humanity's fleeting nature. Creating ambitious signature pieces on the largest imaginable scales, Cai's electrifying work often transcends physical permanence all while burning its philosophies into the audience's mind forever.

Told through the artist's own words and those of family, friends and vigilant observers, Sky Ladder: The Art of Cai Guo-Qiang tracks his meteoric rise and examines how and why he engineers artworks that stretch as far as the eye can see and wow millions, such as a six mile-long gunpowder fuse stemming from the Great Wall into the Gobi Desert or the astounding opening and closing ceremonies of the 2008 Beijing Summer Olympics.

With the documentary’s ambitious namesake—a 1,650-foot ladder of fire climbing into the skies above his hometown—the film captures Cai's work, which unites Eastern philosophy with contemporary social issues. Sky Ladder: The Art of Cai Guo-Qiang (produced by Wendi Murdoch, Fisher Stevens and Hugo Shong, with Executive Producer Bennett Miller) is an in-depth portrait of a contemporary creative icon with an ever-present social-political consciousness, a man whose captivating works are visually imposing with implications just as grandiose.

And don't worry if you miss it at London Film Festival on 7th or 8th of October, it's coming to Netflix a week later...

Find out more and book tickets for LFF here.