News - Salisbury Cathedral back in Salisbury 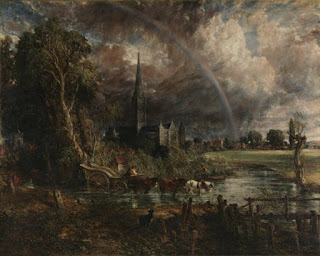 John Constable’s Salisbury Cathedral from the Meadows 1831 has gone on display in Salisbury as part of the Aspire project...

The painting, part of Tate’s collection, is touring the UK and has ‘gone home’ to The Salisbury Museum until 25th March next year. The Museum, which sits adjacent to the Cathedral, have mounted a new exhibition, Constable in Context: Salisbury Cathedral from the Meadows in perspective, where the painting stars among images of Salisbury Cathedral through the ages.

Salisbury Cathedral from the Meadows is one of a series of monumental ‘six footer’ canvases painted by John Constable. He called it ‘The Great Salisbury’ and wrote ‘I am told I got it to look better than anything I have yet done.’

The exhibition puts Constable’s painting in its historical and artistic context, by showing it alongside paintings of Salisbury Cathedral from the 17th century to the 21st century. This visual timeline features many works from the museum’s own collection, including watercolours by Henrick de Cort, Frederick Nash, Frederick MacKenzie and JMW Turner. Visitors can see Constable’s place in the recording of this great building and also the huge impact his radical painting style had on the artists who followed. There was a marked turning point following this work, with many artists changing direction from architectural representations to being more expressive. Visitors are also able to ‘walk in Constable’s footsteps’ and take in the view of the Cathedral from where Constable painted the original scene.

A new content hub is now available on Tate’s website to coincide with the opening of the exhibition. The hub offers a ‘longer look’ at Constable’s work, providing an in depth exploration and the context in which it was painted. Three specially commissioned films provide insight into the conservation and curation of the painting, and offer activities inspired by Constable.

Adrian Green, Director of the Salisbury Museum, said ‘We are very excited that we are displaying Constable’s masterpiece in the city that inspired him. The Museum is located opposite the Cathedral, backs onto the water meadows and is adjacent to where Constable stayed in the Close – so one can literally walk out into the canvas and see a landscape that has changed little since Constable’s time.’

Caroline Collier, Tate’s Director of Partnerships and Programmes, added ‘We are happy that Constable’s remarkable painting will soon be seen in Salisbury, a place that meant so much to Constable and was the inspiration for this, one of his greatest works. Constable thought so highly of the painting that he wanted to tour it nationally. The Salisbury Museum is a fitting partner for the Aspire programme, that has enabled this masterpiece to be enjoyed by people across England, Scotland and Wales, fulfilling Constable’s ambition for it to reach a wide public.’