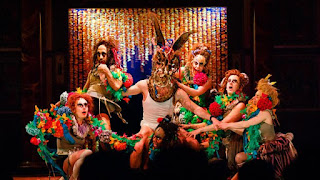 Emma Rice’s inaugural production as Artistic Director at Shakespeare’s Globe is to be live streamed around the world for audiences to enjoy for FREE this Sunday as part of Shakespeare Lives...

The final night of the Bollywood-infused A Midsummer Night’s Dream, which has wowed critics and played to sold-out audiences at the Bankside theatre in London, will be streamed live on the Shakespeare Lives website on Sunday 11th September from 6.30pm. It is the first time any production has been live streamed from Shakespeare’s Globe. Introduced by actress and comedian Meera Syal, the show will also be available on-demand on the Shakespeare Lives digital platform which can be accessed anywhere in the world as well as on BBC iPlayer for viewers in the UK.

As part of the build-up to the live performance, presenter Lindsey Chapman will take audiences on an access all-areas tour exploring the inner workings of the faithfully reconstructed Elizabethan theatre. In a series of live broadcasts on social media, Lindsey will speak to the cast and crew behind the production and find out what goes into running the world famous venue.

Emma Rice, Artistic Director of Shakespeare’s Globe, said “I’m thrilled that my first production at the Globe is being filmed by the BBC in this innovative and energetic way with the British Council. I can’t wait to see the live broadcast as it captures the joyous spirit of A Midsummer Night’s Dream - my love letter to Shakespeare and The Globe! I am especially delighted to think that this landmark broadcast will reach even more people than we can fit in the Globe over an entire summer season - especially when we have been sold-out for weeks and have queues round the building wanting to share the love! This is the best gift to the audience I can imagine and will catapult this amazing play and extraordinary venue into living rooms around the country. Magic indeed! Wonder indeed!”

BBC Arts’ Head of Digital Development Peter Maniura added "Theatre is all about the live experience and I'm delighted that the energy, brilliance and sheer fun of Emma Rice's smash-hit production is going to reach the biggest possible audience globally through this live-stream. A fitting climax to our Shakespeare Lives Digital Festival!"

Shakespeare’s Globe’s A Midsummer Night’s Dream joins Royal Shakespeare Company’s Richard II with David Tennant as the tortured king and Talawa Theatre’s King Lear with Don Warrington in the lead role to complete a trilogy of full-length performances on the digital platform. The comedy, tragedy and history plays are just three of the quality performances and context that have attracted more than a million people to the site since April.

Shakespeare Lives is a six-month, online festival to celebrate 400 years since the death of William Shakespeare. Hosted in Birmingham, accessible anywhere in the world and co-curated by the BBC and the British Council, it has brought audiences performances and insight from some of the nation’s greatest performing arts institutions. Since it launched on Shakespeare’s anniversary 23rd April 2016, more than a million visitors have experienced a remarkable collection of interpretations of Shakespeare’s work together in one digital space, in collaboration with the Royal Opera House, Shakespeare’s Globe the British Film Institute, Hay Festival and the Royal Shakespeare Company. The project is supported by the GREAT Britain campaign.