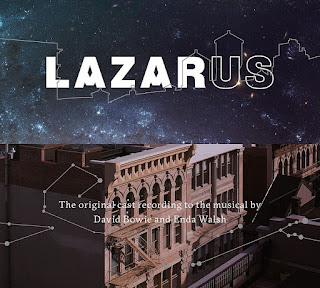 The Lazarus Cast album will be released on October 21st, which will include the final 3 Bowie studio recordings...

As the November 8th UK opening of Lazarus at London’s King Cross Theatre approaches, the cast and band of the original New York production will release their versions of the David Bowie songs from the show as the Lazarus Cast Album on October 21st on ISO / Columbia / RCA Records.

The album is now available to pre-order with all orders receiving instant downloads of the cast versions of “Life On Mars?” (sung by Sophia Anne Caruso) and the title track (sung by Michael C. Hall and performed at last night's Mercury Music Prize ceremony - see below).

Standing alongside the cast’s interpretations of classics from his canon are the three final David Bowie studio recordings. Co-produced by Bowie and Tony Visconti and recorded with Donny McCaslin and his quartet, the same band that played on Bowie’s ★ album, these last three songs — “No Plan,” “Killing A Little Time,” “When I Met You”— bring completely new dimensions to their cast counterparts. The original ★ version of “Lazarus” is also included on the cast album.

The Lazarus cast album was produced by the show’s musical director Henry Hey, who had previously worked with Bowie on “The Next Day” and features vocals from Hall, Caruso, Cristin Milioti, Michael Esper and other cast members backed by the seven-piece house band Hey assembled for the New York run. The album was recorded January 11th, 2016. Upon arriving at the studio, the musicians and cast were shocked and saddened to learn that Bowie had passed away the evening before. Their emotional performances that day are captured on this recording.

The distinctive artwork for the Lazarus cast recording has been designed by Jonathan Barnbrook who also worked with Bowie on the ★, The Next Day, Heathen and Nothing Has Changed albums.

Written by Bowie and Enda Walsh, directed by Ivo Van Hove and produced by Robert Fox, Lazarus opened December 7th, 2015 at the New York Theatre Workshop to great critical acclaim. The New York Times raved “Ice-cold bolts of ecstasy shoot like novas through the glamorous muddle and murk of Lazarus, the great-sounding, great-looking and mind-numbing new musical built around songs by David Bowie,” while Rolling Stone hailed it as a “Surrealistic Tour de Force… milk-swimming, lingerie-sniffing, gin-chugging theater at its finest.”