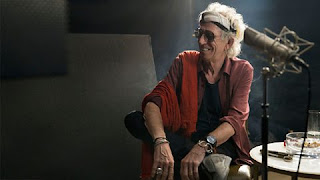 This month, BBC Four once again takes a bold and innovative approach by inviting Keith Richards to curate an entire weekend of programming...

“No one has taken over a TV channel before. Let's see how it flies!"

Keith Richards’ Lost Weekend will take viewers on a rock ‘n’ roll mystery ride from dusk till dawn on Friday, Saturday and Sunday night later this month. He will hand-pick all the shows and will feature between them across each night in a specially-filmed in-depth interview, making this an extraordinary televisual journey.

Filmed and compiled by acclaimed director, Julien Temple, Keith will be on-screen between each of the programmes taking viewers through the night with him, giving a fascinating insight into his life philosophy, legacy, world views and so much more, and talking about his choices which include movies, documentaries, comedy shows, cartoons, music performances and clips, old ads, moving stars and random night-related imagery.

His selections include films such as Alfred Hitchcock’s The 39 Steps, The Man Who Would Be King starring Sean Connery and Michael Caine, 1948 Italian classic Bicycle Thieves, a 1947 film noir Out of the Past directed by Jacques Tourneur, and macabre horror movies The Sorcerers and I Walked with a Zombie. Plus there will be archive treats featuring Johnny Cash, Jimi Hendrix with Keith, and never seen before archive of the Rolling Stones.

There will also be Julien Temple’s new 75 minutes long Director’s Cut of Keith Richards - The Origin of the Species which aired on BBC Two in July. Just like a pirate broadcast, the full schedule from 7pm to 4am won’t be released in advance. With Keith taking back the reigns, viewers will discover most of his choices only when he introduces them…


Julien Temple, Director, said, “The programming will be interwoven with a uniquely relaxed, wide-ranging and intimate interview in which Keith shares his legacy, world views, life philosophy and survival strategies with viewers. It’s an open invitation for the audience to get to know Keith in-depth over three nights in a way that has never been seen before.

As dawn breaks, those viewers who have experienced the full ride can celebrate the fact that they have been able to make it all the way and out the other side with Keith Richards as the sun comes up on their TV screens.”

Cassian Harrison, Editor, BBC Four, said: “BBC Four has always been the home of singular, eclectic and passionate voices - and who would qualify more for that moniker than the legendary Mr Richards. I’m delighted (if also a little nervous) to be entrusting the channel to Keith and to journeying with him through the night, enabling viewers to spend a weekend on BBC Four with one of the most famous and intriguing people in the world in a way that transcends the bounds of a traditional channel.”

Jan Younghusband, Head of Music TV Commissioning, added “BBC Four is very much the musician’s channel so we were thrilled when Keith agreed to curate a weekend of programming, giving viewers a truly original experience.”

The Lost Weekend follows BBC Two documentary, Keith Richards - The Origin of the Species, by Julien Temple, in which he journeyed back to his formative years during the post-war era - part of the BBC Music My Generation season, telling the story of popular music.

Julien Temple is an award-winning director with a catalogue of work steeped in music and film-making. His first feature film was the Sex Pistols Great Rock 'n' Roll Swindle and he directed the band’s music video for ‘God Save the Queen’. He has directed numerous music videos for artists including David Bowie, Rolling Stones, Janet Jackson, Sid Vicious and Whitney Houston and - among many film credits - directed Absolute Beginners featuring Bowie and Patsy Kensit, and Bullet featuring Tupac Shakur and Mickey Rourke.