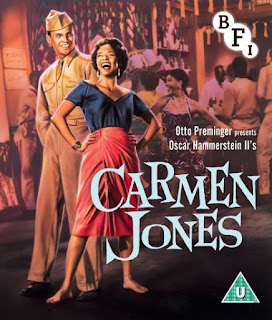 The classic musical film Carmen Jones is coming to Blu-ray at the end of the month thanks to the BFI. Watch a clip...

This 1954 film by Otto Preminger (Laura, Anatomy of a Murder) was rightly hailed as a milestone in musical cinema. Dorothy Dandridge, whose vibrant performance resulted in the first Oscar® nomination for an African American actress in a leading role, lights up the screen as the beautiful temptress.

With an all-black cast, this critically acclaimed version of Bizet’s opera Carmen features an iconic soundtrack from Oscar Hammerstein II, including songs such as ‘Beat Out Dat Rhythm on a Drum’, and was voluptuously shot in Cinemascope Technicolor.

In one of the sexiest performances on the big screen at the time, Carmen Jones seduces the handsome GI Joe (Harry Belafonte) away from his sweetheart Cindy Lou (Olga James), but after she tires of him and takes up with heavyweight prize-fighter Husky Miller (Joe Adams), she only succeeds in triggering Joe’s tragic revenge.

Special features on the Blu-ray, released on September 26th, include: