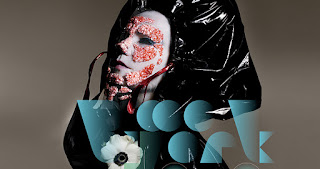 Somerset House has announced the European premiere of Björk Digital, an exhibition of digital and video works, resulting from Björk’s collaborations with some of the finest visual artists and programmers in the world and coinciding with special performances at the Royal Albert Hall and the Eventim Apollo in Hammersmith.

Björk beamed into yesterday's Somerset House press conference from 1,200 miles away in Reykjavík via a live motion capture avatar. Her movements and voice were captured by a computer graphics and media team in Iceland and streamed into London to allow her to accompany Jonathan Reekie, Director of the Somerset House Trust for a Q&A launching the new Björk : Digital exhibition.

Including state-of-the-art 3D technology from Autodesk and Unity, Björk wore a special ‘mocap’ (motion capture) suit in the studios of the Icelandic Media College in Reykjavik and was digitised by specialist engineers from London’s The Imaginarium Studios.

The avatar itself (below) offers a glimpse into a new upcoming VR video for "Family" which will be premiered later this year, directed by Andrew Thomas Huang with co-creative direction by Björk and James Merry. 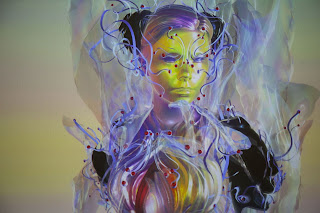 Björk constantly and consistently challenges the status quo, pushing the boundaries of what is possible in music, art and technology. The exhibition at Somerset House invites visitors to engage with Björk’s work through the latest in VR technology. Björk believes that by offering a private theatrical experience, VR provides a unique way to connect with her audiences.

The exhibition will include Black Lake (see below), Björk’s groundbreaking immersive film commissioned by the New York’s Museum of Modern Art where the audience is treated to panoramic visuals and enveloped by a bespoke, cutting edge surround-sound system. Filmed in the highlands of Iceland, the work was directed by the Los Angeles-based filmmaker Andrew Thomas Huang. Huang also collaborated with Björk on Stonemilker VR, a project that transports the viewer to a private performance of the first track from Björk’s critically acclaimed Vulnicura album. Shot on location on a remote, windswept beach in Iceland and viewable in full 360-degree VR, the viewer will be able to experience a one-to-one recital.

In Mouthmantra VR, Björk worked with director Jesse Kanda to capture intense footage from inside her mouth whilst she sings the title track, her teeth and tongue twisting and seemingly taking on a life of their own. Meanwhile, Notget VR, directed by Warren Du Preez and Nick Thornton Jones, presents Björk as a digital moth giantess transformed by stunning masks created by artist James Merry.

As part of the European premiere of Björk Digital, Björk will hold rare set of performances at the Royal Albert Hall on 21 September and Eventim Apollo on 24 September. These are her only UK dates this year and her first since her acclaimed sold out Biophilia show in the round at Alexandra Palace in 2013.

Somerset House’s edition of the Björk Digital exhibition will include never-before-seen work by Björk. There will also be an interactive educational space which showcases the innovative apps and custom-made musical instruments from Biophilia, an app created by Björk that explores music, nature and technology. A programme of Björk’s extensive video work will run alongside the exhibition, spanning the artist’s 24-year career during which she has collaborated with film directors including the award winning Spike Jonze, Michel Gondry, Nick Knight and Stephane Sedanaoui.