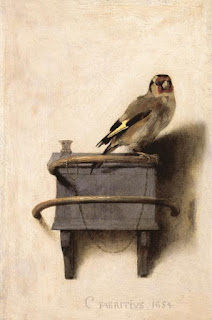 One of the most iconic paintings in the world, which has never before been seen in Scotland, will make a flying visit to Edinburgh as part of an exciting programme of autumn exhibitions at the National Galleries of Scotland...

The Goldfinch, a beautiful and mysterious masterpiece from the Golden Age of Dutch art, which was painted by Carel Fabritius in 1654, will be on loan to the Scottish National Gallery for six weeks only, from 4 November to 18 December. Across town at the Scottish National Gallery of Modern Art, a unique showing of work by two internationally renowned artists – Scotland’s Karla Black and Kishio Suga from Japan – will be another autumn highlight, occupying the entire ground floor at Modern One, while at Modern Two the year will be brought to a spectacular close with the much-anticipated Joan Eardley: A Sense of Place, a powerful exploration of the locations that inspired the artist’s remarkable body of work. In addition, the first in a significant new series of annual exhibitions exploring the extraordinary richness of the photography collection at the NGS will open at the Scottish National Portrait Gallery this October, charting the development of landscape photography over the past 175 years.

Carel Fabritius (1622-1654) is often seen as the link between two giants of Dutch painting: Rembrandt van Rijn (1609-69), in whose workshop he was a star pupil and Johannes Vermeer (1632-75), on whose work he had a considerable influence. An artist of remarkable skill, Fabritius was tragically killed at the age of 32, when a gunpowder store exploded, destroying large parts of the city of Delft and killing hundreds of its residents. It is presumed that much of Fabritius’s work was lost in the explosion, and only around a dozen of his paintings survive. Among these The Goldfinch, which was painted in the year he died, is considered by many to be his masterpiece.

The Goldfinch will travel to the SNG from its home in the Royal Picture Gallery Mauritshuis, in The Hague. The painting has never before been shown in Scotland, and has only been exhibited in the UK on a handful of occasions. When it was last shown outside the Netherlands, at the Frick Collection in New York in 2014, it was seen by a record-breaking 200,000 people (many of whom happily endured long queues in sub-zero temperatures).

This tiny but mesmerising painting already enjoyed international renown before it inspired a Pulitzer Prize-winning novel by the US publishing sensation Donna Tartt. The intense interest surrounding the 2014 book propelled The Goldfinch into the limelight, bringing it to the attention of Holywood producers, who now hope to adapt Tartt's story for the big screen. This will be a very rare opportunity for art and literature lovers alike to come face to face with one of the most compelling paintings in Western art.

Joan Eardley: A Sense of Place will explore the work of one of Scotland’s most admired artists, who died in 1963, aged just 42. In a career that lasted barely 15 years Eardley had two main subjects: the slums of Townhead in Glasgow and the fishing village of Catterline, south of Aberdeen, which she first visited in 1950. She moved regularly between the two places, drawing and painting apparently contrasting imagery – street kids and tenement buildings in the one, stormy landscapes and boiling seas in the other. The two subjects contrast, but are not, at heart, so very different. Both had a peculiar sense of place that attracted her.

The exhibition will plot, as closely as possible, Eardley’s movements in both places and explore her working methods, from rough sketches to detailed pastels; from compositional designs and photographs through to large, resolved oil paintings. It will draw on a remarkable archive of sketches and photographs which remains largely unknown and unpublished, and which was given to the SNGMA by Eardley’s sister, Pat Black, in 1987. Fragile testaments to the artist’s working procedure, they will be specially conserved and presented for this exhibition, where they will be seen for the first time. 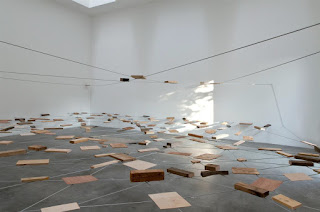 Although Karla Black (b.1972) and Kishio Suga (b.1944) work on opposite sides of the world and were unaware of each other’s art until their new exhibition at Modern One was conceived, they are united by their use of everyday materials to create sculptural works of sublime beauty, complexity and originality, which they make in response to specific spaces.

Based in Glasgow, Black is one of the country’s leading contemporary artists, and represented Scotland at the 2011 Venice Biennale. She is renowned for large-scale abstract sculptures, which are often composed of delicate and ephemeral materials, such as cellophane, soap, eye shadow, petroleum jelly, toothpaste, chalk powder and soil. Suga was born in Morioka in Northern Japan, and was a key member of Mono-ha (“School of Things”), a pioneering artistic movement which emerged in the late 1960s and early 1970s. His radical adoption of simple everyday materials, such as stone, wire , iron, zinc and paraffin in temporary, site-specific sculptural arrangements, which he calls ‘situations’, makes Suga one of the most thought-provoking and original artists working anywhere in the world today.

Karla Black and Kishio Suga: A New Order will be Suga’s first major showing in the UK, and has been planned to coincide with his first large-scale retrospective exhibition in Europe, at the Hangar Bicocca, Milan, and a solo show at the DIA Foundation, New York.

Black will make an ambitious and entirely new body of work for A New Order, including a stunning room-sized sculpture made from cotton wool – her largest work to date using this material. Suga will re-create some of his most celebrated works, and will also make an entirely new piece conceived especially for the show.

The View from Here: Landscape Photography from the Collection of the National Galleries of Scotland, which opens at the SNPG on 29 October, will bring together 70 key works which chart the history of landscape photography from the earliest days of the medium to the present day.

Stunning images of the Egyptian pyramids, taken when photography was a relatively new artform; intensely beautiful photographs of the Outer Hebrides taken by the legendary American artist Paul Strand (1890-1976); and thought-provoking landscapes by British-American photographer Sze Tsung Leong (b.1970), which address a growing uniformity in our globalized environment, will be among the highlights of this fascinating exhibition.

Many of the works on show have rarely been seen before, and there will also be a number of new acquisitions on display for the first time, including work by one of the foremost contemporary landscape photographers in the world, Thomas Joshua Cooper (b.1946), and Felix Thiollier (1842-1914), a French industrialist who gave up his business at the age of 37 to pursue photography, and whose work was influenced by the landscape painter Camille Corot.

The NGS is home to an outstanding collection of photographic art, running to some 38,000 examples. The View from Here will be first in a series of thematic exhibitions to be held at the SNPG over the next few years. The 70 carefully selected works on show this autumn will explore not only the theme of landscape but also the evolution of photography, from original calotype negatives and salted paper prints of the 1840s to the large-scale digital format prints of today.