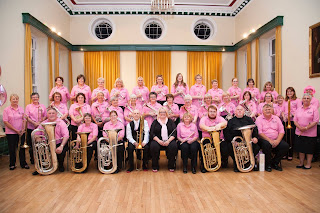 Steve Taylor-Bryant discovers that where there's bra'ss, there's brass as he talks to Pam Fisher about the (nearly) all female charity brass band, Pink Bra'ss...

My love of brass bands is no secret. I'm not ashamed to say I was a percussionist in one in my younger years, in fact my Dad is Bandmaster and my Mum a percussionist for that same band, Weston Brass. I have friends and a great sense of community from brass banding, I have favourite pieces to listen to (Tea for Two: Fantasy for Percussion arranged by Howard Snell) and favourite pieces to play (my Dad’s arrangement of Raiders of the Lost Ark) but most of all I have a charitable side that is rooted in my life in a musical family. Bands and bandspeople will do anything for anyone. They earn very little money these days and yet, despite having to pay for a lot, they still find time to support great causes.

Which leads me to today's interview. Pam Fisher is an old family friend, the relationship between my parents and Pam goes back more years than any of us care to (or can) remember and the last time I spoke to Pam I was about 4" shorter and few decades younger than I am now. Through Pam though I have learned of a great charity project involving brass bands that I want to get a wider audience for. Pink Bra'ss is an all female brass band formed to raise money through concerts and events for Breast Cancer Now. Welcome please Pam Fisher...

Sadly Steve, David passed away nearly 2 years ago now. He had very ill for sometime but, true to form, just 3 days before he died, he was in the bandroom with the baton in his hand. My children and stepson have children of their own now. That makes me a grandma 6 times over !

It's been *coughs* 24 years since I was involved in the world of brass banding. How's the band environment in general these days? It seems to get a little more credit and media coverage nowadays, so has it got rid of the "boring" shackles it once had?

It’s alive and kicking, Steve. Go to a brass band concert now and you’ll get royally entertained. We have had to move with the times and you are just as likely to hear Colonel Bogey as you are Happy! There's more singing and even a bit of dancing these days.

How did you first get involved in brass bands?

When I started at Churchill Secondary Modern – that gives my age away –the music master, Tom Shearman just looked at me, said “your brother plays a brass instrument so you can too.” That was it. A baritone was put in my hand and I was hooked. I didn’t stand a chance really, When little sister started a few years after me the same happended to her. All 3 of us are still playing today! Mike with a Morris dance troop, Gill with Weston Brass and me with Burnham & Highbridge

So, Pink Bra'ss - I love that name! How did this project come about, how did you get involved and what is the aim of the band?

Heather Bailey from Wincanton band was helping the band at Burnham & Highbridge out – as you do – and asked if I would be interested in being part of a small group of women who wanted to form an all female brass band. I said yes immediately. I mean – how exciting! There’s a group called “Boobs 'n' Brass” up north but nothing like it here in the West Country. It was Heather's and Sharon James’ idea to form one here. I couldn’t wait to be a part of this. The idea was to draw ladies from local bands with a female conductor and play a one-off concert to raise funds for Breast Cancer Now. Little did we know just much this would take off! 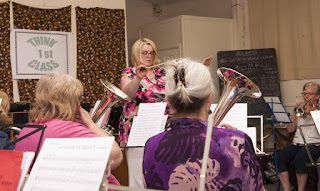 Was it easy to get other band members to spare their time to come and play?

We had no problem really other than trying to find female double Bflat players! We ended up with men in shocking pink wigs and the band trademark pink polo shirts! Joanne Sykes, from that famous brass band world Sykes family, agreed to wield the baton and we were away. Rehearsals started in the Burnham & Highbridge bandroom in May and we played our inaugural concert in the middle of July. Such a hectic and exciting couple of months! I don't think any of us realised just what we had taken on or just how much work was involved in putting this on but a concert we did indeed play to a sell out audience in the Town Hall in Wells. Joanne's son Stephen, who himself is having treatment for cancer, played a trombone solo – had us all in tears - and so did his Dad, Steve. Beverly King sang a couple of songs along with the band. It was fabulous!  Our fantastic fund-raiser Pat Trott also collected an amazing array of prizes for a raffle which raised over £400 and we raised just over £2000 at the event. We will shortly hand over a cheque for £1500 to the charity. We need the rest to start us off for the next one!

What sort of programmes do you play? I must admit I liked the mix of modern pop and film scores with traditional marches when I was a player.

We played everything from marches to show selections to pop music - Jo has great ideas for us. I think we are going to have to put in extra practice to play some of it, but we’ll see.

Do you have a favourite piece?

No, I don’t think I do. I’m just a lover of anything played by a brass band. It’s in my blood now and I can’t imagine life without it.

Where next for Pink Bra'ss? What does the future hold?

We are talking about another concert in the spring, after the area championships I expect and this will raise funds for the scanner appeal at the RUH where Stephen Sykes is having his treatment.

Where can people find out more about Pink Bra’ss, hear your music and get involved in the fundraising?

You can still donate to Pink Bra'ss on their Just Giving page too.