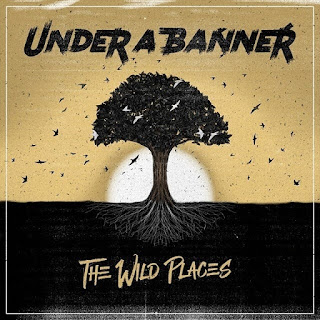 AlbieMedia's Song of the Day (SotD) is our choice of a single or album track that we think you need to hear. Today, Susan Omand doesn't talk about the new track from Under A Banner's forthcoming album The Wild Places...

If you know me or the band you will know that there is a personal conflict of interests here so I'm not going to say anything about their brilliant new song off their brilliant new album which you can pre-order now using the links at the bottom of the page.

Instead I will leave it to their wonderful new record label Bad Elephant Music's press release to tell you more about it. That way I can't be accused of being biased now, can I?

Incorporating a heady blend of influences from across the musical spectrum, Under A Banner combine intelligent composition with Adam Broadhurst’s coruscating lyrics, producing a hard, uncompromising sound with powerful injections of raw emotion.

Their previous releases have received considerable acclaim: their 2014 album Close to the Clouds was described by Liverpool Sound and Vision as “an album of great maturity and depth”, and Midland Mosh praised their “great vocals, talented musicians, and a nice unique style”. Under a Banner’s fourth official release, the EP Victory Time, was awarded a five-star review and the coveted accolade of EP of the Month by Ryan’s Gig Guide, and its tracks have had considerable airplay on local radio stations.

The Wild Places raises the bar even higher, with a much bigger sound stage, produced by Alistair Jamieson at Park Studios in Birmingham, and mastered by Jon Astley, who has worked with The Who, Peter Gabriel, The Rolling Stones and many others.

Check out the video for preview track Snow Song.

Released on 30th September, CD and download versions of 'The Wild Places' are now available for pre-order on the Bad Elephant Music sales site at http://music.badelephant.co.uk/


Image - Under A Banner