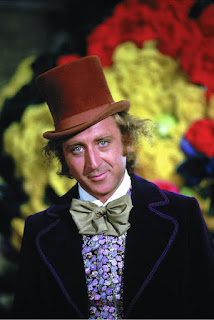 A slightly different SotD for today as Susan Omand looks back at a song from Willie Wonka and the Chocolate Factory, a song sung by Gene Wilder who passed away yesterday...

Gene Wilder was no stranger to the song and dance routine in his films from his sublime work on Springtime for Hitler in The Producers to "that" tapdance routine to Puttin' on the Ritz in Young Frankenstein. However, for me, one film stands head and shoulders above the rest when it comes to the musical prowess of Gene Wilder and that is Willy Wonka and the Chocolate Factory. His voice throughout is clear, strong and tuneful but manages to convey in Willy Wonka a certain melancholy and resignation about the world beneath the upbeat happy words.

There is an argument on the internet, and let's face it there always is about something, that the words to Pure Imagination were written by Roald Dahl himself as part of the book but, if you have read the story you'll know that the song Wonka sings on the boat ride ("There's no earthly way of knowing...") is the only song lyric lifted directly from Roald Dahl's book. All other songs were written specifically for the film by Leslie Bricusse and Anthony Newley and they received an Oscar nomination for the whole film score. It's also quite a thought that the pairing that wrote the Oompa Loompa Song also wrote the Bond theme for Goldfinger!

As a song though, Pure Imagination has captured the hearts of many and has been covered by musicians as diverse as Lou Rawls, Jamie Cullum and Maroon 5 and has appeared in shows from the Olympics to Family Guy. But, to my mind, the original is still the best.