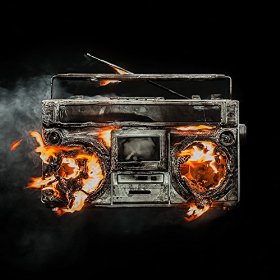 AlbieMedia's Song of the Day (SotD) is our choice of a single or album track that we think you need to hear. Today Nate McKenzie listens to Green Day's new single, Bang Bang...

Between Blink-182's Bored to Death , Radiohead's Burn the Witch and now Green Day's new single Bang Bang, the 90s resurgence is in full swing midway through the 20-Teens.

The first single off of the upcoming Revolution Radio (Oct. 7th) Bang Bang is the rough, heavy-lick-fuelled blast that you expect from Green Day. Despite the terrible song title which is identical to an Ariana Grande trash-pop song from 2014 (I would suggest a re-title of "World War Zero" - lyrics from the song) Bang Bang is classic Green Day, which is to say there aren't a lot of songs on mainstream radio that sound like it.

Part war-treatise, part reminiscent commentary on the conflicting feelings inherent with coming of age, Bang Bang elicits the same sort of emotions that I felt when listening to American Idiot for the first time. Specifically, that feeling of "I want more." Although the context of the lyrics aren't as resonant as that of American Idiot, Bang Bang is a promise to fans that Revolution Radio is something to highly anticipate.