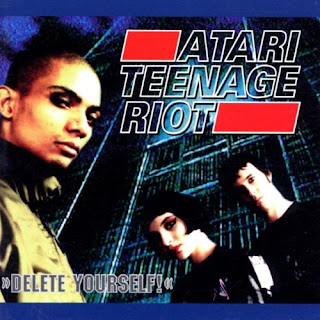 AlbieMedia's Song of the Day (SotD) is our choice of a single or album track that we think you need to hear. Today, Reece Morris-Jones Hunts Down the Nazis with Atari Teenage Riot...


Some days you just want to get mad...

In the modern era, even in politics, the Left doesn't want to offend anyone else. Everything is grovelling and rolling up into a ball, whilst the more extreme right wing are given free reign to dictate the discourse of the debate.

In a western world where anyone who isn't a man with a beard in a woolly jumper, or someone willing to sell their mother whilst saying it's for the “leftist cause”, is called an extremist, it's nice to remember that elements of the Left still have a conscience.

If there's a band that typify a staunch refusal to bend to convention even as they get old, it's Atari Teenage Riot. A German group that formed as a response to 90’s Neo Nazi groups gaining prominence in the country, their first single (Hetzjagd Auf Nazis!) literally means “Hunt Down the Nazis!”.

They then proceeded to get a record deal and use the advance to form their own studio, before running off with the money and releasing their own albums independently. They're one of a few who can claim a collaboration with Rage Against the Machine was their most tepid work.

They're still around today and haven't changed a bit but, in an era of detached political commentary, it's good to feel music where the creators are actually mad.

The kind of electronic music you can only make when you think the Prodigy sound like sellouts.

Further suggestions: Too Dead For Me, Sick to Death, Destroy 2000 Years of Culture.