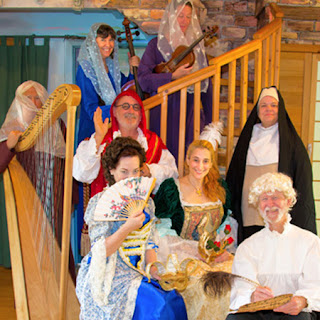 An early start at Sweet Venues for Susan Omand as she went to watch Vivaldi for Breakfast by Early Music Maui...

Free coffee and pastries is always a great way to bribe a reviewer start a morning play at Sweet Venues and that was the breakfast provided for us with Vivaldi for Breakfast. This is the third of such composer centred breakfast plays that Early Music Maui, all the way from Hawaii, have put on at the Edinburgh Fringe over the years, others being Bach and Mozart, composers chosen by the writers Ginny Morgan and Matthew Spangler because of their music’s universal popularity. Vivaldi for Breakfast is billed as a musical comedy that looks at the man behind some of the most recognised classical music on the planet and charts the fame and subsequent downfall of the “Red Priest” thanks to the church, an inquisition, a soprano and an orchestra of jealous female virgins. Yes really.

The play itself starts at the end. A pauper’s grave is being dug for Vivaldi who, four years after being indicted by the grand inquisitor for “conduct unbecoming” with the orchestra, dies penniless and destitute with his music destined to be forgotten. This is all told to us by the narrator, one George Frideric Handel. He then goes on to backtrack to the time of that inquisition, the reasons behind it, including his own part in proceedings and I choose my words carefully there as his “part” had quite a bit to do with it apparently.  We watch the drama unfold on stage as Handel and Vivaldi meet in Venice because Handel wants to “use” (yes, there’s a lot of innuendo in it) some of Vivaldi’s girls in his latest opera. This, and the hiring of soprano Anna, causes a fit of jealousy which is compounded by the Grand Inquisitor’s insistence on seeing the “beautiful” girls of the orchestra and false accusations ensue.

This was a very interesting comedy drama with music, rather than being the musical comedy it was advertised as, as the music, although very much part of the story, didn’t actually tell the story. I realise that’s me being pedantic, all I mean is don’t go expecting an all-singing all-dancing musical because it isn’t. Because it was a Fringe show the staging was quite minimal but it was definitely enough to set the scene. I was confused at first by the shuttered screen at the back but it soon became an intrinsic part of the story as the hiding place for the orchestra who, historically, could not be seen in public because they were virgins. To be honest, I would have actually liked to see the instruments being played, as I’m one of those people that goes to operas and musicals and spends a lot of time watching the orchestra rather than the action, but I completely understand that it was part of the story that they were hidden. The dialogue itself was well written, although the innuendo felt a bit shoe-horned in at times and was unnecessary, and it held my interest with a lot of information about the man and his music. I learned a lot about Vivaldi as a person, as well as listening to some new music of his that I’d never head before, although I would have liked a list of what music was played so that I could have looked for it later. However I could really see an adaptation of this working in schools as a way to make the perception of classical music a bit less “boring” by breathing life into the characters involved. The acting was, for the most part, really good with the main characters being very engaging and the singing, for that time in the morning anyway, was impressive with a notable attempt at castrato being the highlight of the vocal work. I would love to give a list of the actors and musicians involved but couldn’t find one easily so I will say that the Red Priest himself was great in his role of the almost naive composer and the Grand Inquisitor was wonderfully OTT and could walk into any Gilbert and Sullivan operetta and steal the show.

As is almost expected with fringe shows, especially early in the run, there were a few fluffed lines and bum notes and a decision needs to be taken about how to actually say the show is finished as the lights didn’t go down on stage or the cast take a formal curtain call. But these are minor niggles in a fun, entertaining and, most of all, informative play that has introduced me to unknown music from Vivaldi and delivered new and sometimes startling facts about the Baroque brilliance of a forgotten composer.

Vivaldi for Breakfast runs until 12th August at 10 am. Tickets and more info from Sweet Venues.