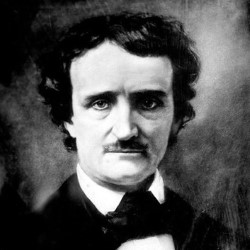 I am a fan of Edgar Allan Poe’s writing so this one was high up on my wishlist of shows to watch at Sweet Venues this year. However, I have seen the odd clunker of author based one man shows in previous years where a lot of the “performance” was lost but I still remained hopeful that this one would be as engaging as it sounded. If nothing else it would be a good chance to hear some of Poe’s stories and poems recited. I needn’t have worried.

As the house lights darken, the room goes deathly quiet for what feels like a long time but is likely, in reality, a few seconds. Then Edgar Allan Poe himself bursts in through the door, shouting over his shoulder into the streets of Baltimore at the people he believes are out to get him. As he settles, he tells us of his childhood and people he connected with while growing up, seamlessly heading off into the poems and stories he wrote for them and about them. Now and again his reminiscing stops as he has an idea about who it may be that is out to get him this night and each idea results in another sidetrack onto a different person, more poetry, more stories, until he finally decides who it must be that is after him and heads out into the night again to meet his fate.

This was a brilliant 50 minute long monologue, made all the more convincing because it was faultlessly delivered by noted Dawn of the Dead actor David Crawford. He was perfect as Poe, very engaging as the characterful writer, and I could have listened to his rich voice for hours. The biographical aspects of the show fascinated too, with many interesting tidbits of information about Poe’s life and loves, and Crawford’s ability to tell a good story meant that the time flew past. I especially enjoyed his animated retelling of The Cask of Amontillado and the allusions to my favourite story of Poe’s, The Masque of the Red Death. There were also several poems in the monologue, some of which were new to me and others, like The Raven, much better known so it was an excellent mix for both connoisseurs of Poe’s work and those completely new to his writing.

If you’re a fan at all of Poe’s work, or just enjoy hearing a good story very well told, go see this.