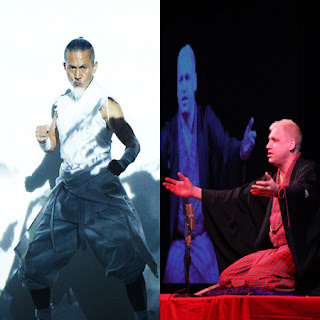 Susan Omand heads east for her final visit to Sweet Venues this Fringe season and experiences some Japanese Iki with Guilty Noodle...

Having seen everything from breakfast opera to fish in dresses to giant dinosaur space bunnies in the past few weeks at Sweet Venues, I thought “let’s round things off with something serene and traditional. Like some Japanese dancing. Some Japanese karate/hip-hop fusion dancing. With nunchaku. In front of a film screen. And a Japanese storyteller. Who’s 6ft tall and blond. And plays an accordion. Yeah, that sounds normal, let’s go for that.”

You certainly get your money’s worth with Guilty Noodle! This is basically a Japanese variety show/immersive experience compressed into 55 minutes as we learned a song, listened to funny stories, watched a short film and saw some stunning dancing/martial arts that some people in the audience got taught how to do. The tall blond is Katsura Sunshine, who has lived in Japan for 18 years and is a Rakugo storyteller and his partner in crime Katsumi Sakakura, the innovator behind projection dance.

What’s projection dance? In a word – beautiful. The way that Katsumi Sakakura moves to interact with the objects and scenes projected behind him is breathtaking and requires split second timing. It’s like nothing you could imagine, you really have to see it as he draws flaming pattern, breaks falling rocks and fights shadow warriors without being able to see them, working as if with a CGI green screen – it reminded me a lot of cut scenes in games like Mortal Kombat or some of the fight scenes in anime or The Matrix. I really don’t want to spoil any of the routines he’s doing as part of the show (there are three and the final one he does, where he fights the shadow warrior, is just stunning) but I was so fascinated with it as an art form I looked up his website when I got back to my desk to try and find an example so you could see what you are missing – the start of this one is like the start of the show but the rest is different so there’s not many spoilers.

As well as these routines, the rest of the show involved Sunshine telling some Rakugo stories which were quite funny, translating the names of some of the karate moves and, of course, there was their short film at the very end which riffed on every futuristic martial arts film you have seen and was very cleverly done.

One thing that the blurb doesn’t tell you about is to be prepared for some audience participation. As well as learning to sing If You’re Happy and You Know It in Japanese, there was the need for much clapping and ooohing on demand in other bits, as Sunshine was insistent that the audience react a lot, not something that Scottish audiences tend to do. They also got three audience members up on stage to learn a short routine moving with the projected images. Fun for those who were with those involved (I saw several with camera phones recording the antics of pals on-stage) but I think 3 volunteers was too many and that bit could have been shortened to just be one volunteer and still have the same effect. But that was the only section of the show that dragged on a bit too much.

The show is pretty much the stage equivalent of visiting one of these Japanese sushi bars where tasty morsels on tiny plates go past you on a conveyor belt. There’s just enough on each plate to give you the flavour but not enough that you get jaded by the richness of it. However, like a sushi meal, I also felt there wasn’t enough flow between the different “plates.” Each one was really good on its own but then it was a case of a complete change “and now we’re going to do this” rather than a seamless transition to move between courses.

That is just a minor niggle though and I really recommend that you go and see Guilty Noodle as it’s only on for this week. And, as their flyer says, “Sometimes Guilty is Good.”