Review - Etherwave: Adventures with the Theremin 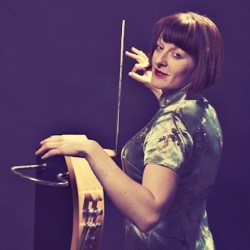 Susan Omand made a lot of woo-oo noises as she watched Etherwave at Sweet Venues...

If you've been reading AlbieMedia at all you know I like a huge variety of music and have a keen interest in instruments themselves and the skills needed to play them. I'm also a bit of a techy geek, in case you didn't know, and enjoy stuff that's just a little bit different. So coming to see Etherwave, Adventures with the Theremin, was a bit of a no-brainer for me as I was hooked as soon as I saw the title. Y'see the theremin is an instrument that ticks most of my music geek boxes all in one. It's a piece of electronica that makes noise when the player's hands move close to the instrument and disrupt the electromagnetic fields around vertical (pitch) and loop (volume) antennae. It's a LOT harder to play than it looks and, when done well, the delicacy of movement as well as the ethereal sound is incredible.

And Ms Hypnotique played it very well indeed. She is, she says, the third-best theremin player in Britain and has built up a very interesting and entertaining show around the instrument. The hour was part talk, part music and included several guests, by way of the eth-o-tron (or TV screen), as well as some improv, audience interaction, a top ten and even a quiz. Being the geek that I am I really enjoyed hearing about the history of the theremin, electronic music and the people involved in creating it. Topics covered went from Theremin's machine and its use by the Communist propaganda system, including Theremin's involvement with the KGB, through its use in film and television soundtracks, how Robert Moog (of the Moog synthesiser fame) adapted the instrument and, coming right up to date, she talked to some of today's top players and how the theremin has got past just being horror film music to become a classical instrument that people are now writing symphonies for. Throughout, Ms Hypnotique made good use of the screen behind her to illustrate points she made in a very entertaining way, giving us lots of information in a format that felt neither dry and academic nor dumbed down and simplified which is a difficult balance to hit.  She also added in a bit of her own history when her brother made her her first theremin and her father had to cannibalise an analogue TV for parts when her instrument broke down just before an important show, to playing the instrument on tour in the Amazon, on TV with Paul o'Grady and even on the Fourth Plinth at Trafalgar Square as an art exhibit.

But of course the best thing about Etherwave is actually getting to watch and listen to a theremin being played and every genre of music was covered, from Rachmaninov and Saint Saens to Led Zeppelin and the Human League, with a bit of Captain Scarlet and Star Trek thrown in for good measure. Watching Ms Hypnotique play is hypnotic indeed as her hands suggested air violin movements, right hand on an invisible fingerboard and left gently bowing at the volume and tone. And the clarity of the notes was simply beautiful.

Etherwave: Adventures with a Theremin is on at Sweet Venues until Sunday 14th.