Review - Death of Her Brother 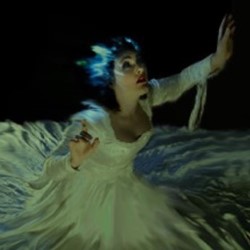 Susan Omand enters a trancelike state as she watches Death of Her Brother at Sweet Venues...

That was my feeling on coming out of Death of Her Brother at Sweet Venues. You know that slight disorientation, that feeling that you’re not quite sure of where you are, what just happened, what was real and what wasn’t, that you have after waking up from a dream. That was how it felt.

Anna stands pale and powerless before a jealous queen. Each has a power the other does not understand and only one can triumph. Anna is determined to protect her beloved little brother. She knows that it is time that someone should dare to rise! But fate is spinning dark cobwebs around them and a sister’s love may not be enough.

Death of Her Brother is indeed dreamlike in a lot of ways. The synopsis above doesn’t really do it justice because this is not a conventional linear play so it defies the laws of conventional description. For the majority of the hour there are only two people on stage, the beautifully gothic Anna (Rose Oke Millett) and a second character (Charis Edward Wells) who gave voice to Anna’s brother in an incredibly eerie way. The way they interacted on stage was amazing as there was never any face to face dialogue, they each spoke out to the audience or off to the side rather than to each other so there was an immediate feeling of disconnect that worked for the story incredibly well. This isolation was augmented by the fact that we never actually see the jealous queen and meant that the pivotal point in the play where a third (Steve Coomber) invades this ethereal disconnected connection between them for only a few minutes but in such a violent and intrusive way, it really is highly effective. It felt almost voyeuristic to watch, like experiencing some sort of mental breakdown for Anna with the rise and fall of voices in her head, the detachment and manifestations of shock and violence.

But there were two more stage presences here that really deserve their own mentions, the soundscaping and the lighting. The performance was backlit throughout by a series of projections – waves, trees, blood in water, abstract lines, which cast shapes and shadows over the actors as well as over the backdrop in a way that was disturbing but not distracting. The sound too, ambient hisses, water, bubbles, enveloped you and held you, adding a multi-sensory depth of the whole play and turning it into an experience that you felt part of rather than just watching as it makes you connect on levels far deeper than the logical. It is indeed entrancing.

As I said at the start I came out of the play wondering if it was part of a dream and that feeling of unease lasted for a couple of hours afterwards which, for me, meant that the artistry of the show had worked. But it is so difficult to explain why unless you have experienced it for yourself. So all I can do is recommend that you go.

Death of Her Brother is on until 21st August, find out more and book tickets here.
Email ThisBlogThis!Share to TwitterShare to Facebook