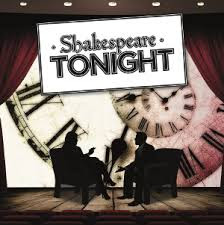 VentSpleen puts his own "quill to parchment" to record his thoughts on Shakespeare Tonight, on today and tomorrow at Camden Fringe...

What if Shakespeare was alive today, Hamlet is being performed for the first time and The Bard is about to give his first television interview? It is this intriguing premise that forms the central concept behind Shakespeare Tonight and William is sharing the sofa with his arch nemesis, Francis Bacon. There is no explanation given as to how a modern day, chat show has managed to secure key influential historical figures for a heart to heart. The explanation is not needed as the idea of being able to ask one of the foremost playwrights ever to put quill to parchment about his life and inspiration is reason enough. When this is coupled with the possible sparks that could fly when he is forced to exchange literary blows with Bacon you should have everything you need for an hour of innovative and intriguing theatre. But then again, truly amazing and memorable theatre isn't just about having a great and engaging concept. It's about developing that idea into a workable script, assembling a cast that can run with the idea and give performances that deliver that concept to an audience. Anyone who knows me and has read previous reviews will know I am passionate about theatre and I love nothing more than enthusing about performances or innovation that have taken my breath away.

Sadly, Shakespeare Tonight is a disappointment but I owe it to you and to the cast and creative team to explain why I have drawn this conclusion. Right from the very start William Shakespeare, The Bard, is given centre stage. We are informed by Duke, the main hosts lackey, warm up man and Social Media Pundit that The Bard is going to be the first guest. Paul Obertelli is wonderful as a man who seems to have lost his way in life but gives his all anyway. Most of the plays laugh out loud moments come from the Duke's well timed reading of poignant hash tagged tweets that pepper the course of the evening. Francesca Mepham is on form as Rebekah, a steely cold Network Exec, who's sole responsibility is to leverage higher ratings for the final show of a chat shows first series. Martina is the diva like chat show host and Priscilla Fere is over the top in her portrayal of a host who is desperate to secure a second series. It actually reminded me of Alan Partridge and here lies my first problem. There wasn't anything wrong with a network exec, hungry for ratings and nothing jarring about a diva like chat show host. We have seen it on countless occasions on film and on stage, nothing new and it is a well worn cliche ridden characterisation. If this was intended to be pastiche then the characterisations needed to be more exaggerated and more extreme rather than your average lunchtime in the Beeb canteen. When The Bard is finally introduced the audience has been primed for his entrance and I was intrigued as to how the central concept was going to be fleshed out.

Peter Revel-Walsh is a disappointment as Shakespeare and not because he isn't an accomplished and well seasoned actor, as the program informs us, but because throughout the entire play Revel-Walsh fluffs his lines and stumbles over every other sentence. This is something that just should not happen and demonstrated an unforgivable lack of preparation to his role. You may accuse me of being too harsh and it is true that the rehearsal time for a large number of shows that appear at Camden Fringe will be short. But I would say that this is not an audiences problem and that the learning of lines is something no actor worth his salt should ever slip up on. I am the biggest champion you will find for imperfect, perfect theatre and I have said on a number of occasions that the occasional line drop actually adds to the believability. When this becomes so acute as to throw other actors onstage and ruin the ending of the play this has nothing but a detrimental effect on the rest of the cast and the production as a whole. Shakespeare Tonight ends with the revelation that The Bard tragically lost his son and was painfully estranged from his father. What should have been a tearful and emotional reunion with his wife, Anne Hathaway, played by a brilliant Kaara Benstead, was completely ruined by the fact that I wasn't sure whether Revel-Walsh was portraying a man overcome with sadness or had just forgotten his lines again. It angers me when creative hard work and preparation committed by others is so carelessly disregarded by one actor who couldn't seem to remember one hours worth of script. There may have been extenuating circumstances and, at the time of writing this article, I am unable to ascertain whether this was the case, but no comment was made before or after the play. Shakespeare was the titular character for the show and the actor that played him did so in such a slip shod manner that nothing could raise the level to anything approaching professional.

The venue was a converted Church building and, without any amplification, it was difficult to pick up on what was being said throughout the play. Diction and the ability to project are essential basic elements of performance and at times pace was affected by mumbling and incoherent speech. It would be unfair to place all of the responsibility at Revel-Walsh's door for Shakespeare Tonight's failings. The ability to project and enunciate words is very much a learned art but I do feel it should have been picked up more effectively at rehearsal stage by the Director. It doesn't matter how good a play is and how cutting the script, if the delivery is impossible to hear they may as well be speaking in a different language.

It wasn't all bad though as Garry Voss portraying Francis Bacon as an attractive, media competent Italian stallion was an act of sheer genius. Voss expertly handled the material and stole every scene he was in, something which would have surely irritated Shakespeare into apoplectic rage. I enjoyed the idea of utilising current technology such as Twitter and Wikipedia and this is an area which could have been expanded on. Shakespeare doesn't react at all on learning that he is trending, sure a literary genius such as The Bard would have made more of that?

Press Night was the second night of a week's run and, with four more shows to go, I can only hope that Director, David Parry insists that lines are learnt. If I had paid for a ticket I would have been asking for a refund and that is something I have never ever said before. Shakespeare Tonight has a great concept at its heart but it needs further development and a tighter script as there were elements to the evening which drag. It might be true that these slower parts may run faster when the remaining cast can pick up the cues correctly. Shakespeare Tonight is to transfer to Edinburgh Fringe after this run and I sincerely hope that Directors notes will have an effect. Theatre matters and good theatre must always be something that is sought after, tonight could have been so much better.

You can book tickets for Shakespeare Tonight here and runs at the Theatro Technis until Saturday August 6th.